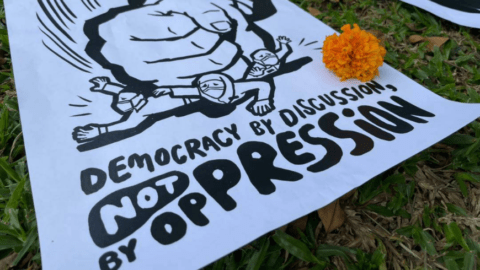 On the occasion of  RightsCon 2021—an annual summit on human rights in the digital age—Access Now, ARTICLE 19, CIVICUS: World Alliance for Citizen Participation, and the Centre for Independent Journalism condemn the Malaysian government’s continued violations of the rights to freedom of expression. Authorities have launched a systematic campaign to silence critical or dissenting voices, including through the enactment of the Emergency (Essential Powers) (No.2) Ordinance concerning “fake news” and aggressive application of existing repressive laws. We call on authorities to cease all baseless investigations that threaten freedom of expression in Malaysia and repeal or substantially amend problematic laws in line with Malaysia’s international human rights obligations.

During a 10 June press briefing at Rights Con entitled ‘New government, old tactics: laws abused to throttle online expression in Malaysia’, four esteemed speakers—Wathshlah Naidu from the Centre for Independent Journalism; Edmund Bon, a human rights lawyer and former ASEAN Intergovernmental Commission on Human Rights Malaysia representative; Fahmi Reza, artist and political cartoonist; and Steven Gan, the editor-in-chief and co-founder of Malaysiakini—commented on the backsliding of free speech protections under the Malaysian government since March 2020 and highlighted some of the most problematic developments in the country.

Emergency Ordinance (No. 2) reinstating many provisions from the repealed Anti-Fake News Act

In March 2021, the Emergency (Essential Powers) (No.2) Ordinance came into force, criminalising the creation, publication and dissemination of “fake news” online about COVID-19. It was immediately criticised by civil society for reinstating problematic provisions from the repealed Anti-Fake News Act 2018. The Anti-Fake News Act was repealed in 2019 after it was slammed for contravening international human rights law and risking illegitimate and overbroad implementation.

While governments have a duty to combat misinformation regarding COVID-19 in order to protect the rights to health and life, actions that restrict freedom of expression must be strictly necessary and proportionate to the aim of protecting public health. The Ordinance does not require criminal intent but rather allows for sanctions against any person who shares information “which is likely to cause fear or alarm to public”. The vagueness of this provision allows for criminal penalties to be imposed on individuals who unintentionally disseminate misinformation. The Ordinance will have a chilling effect on discourse about the pandemic and could deprive individuals of access to crucial health information. To combat the spread of misinformation relating to COVID-19, the State should instead ensure the timely and regular dissemination of accurate information by trusted bodies. It should also engage in public awareness campaigns and other efforts to promote media and digital literacy.

Not long after the Ordinance came into force, concerns that it would be used in a repressive manner were affirmed. On 1 June 2021, the Inspector-General of Police, Datuk Seri Acryl Sani Abdullah Sani, stated that the police had opened 21 investigation papers under Section 4(1) of the Ordinance since 12 March 2021, and that 10 individuals had been detained—with three remaining in detention at the time of writing. Fines enforced under the Ordinance have also been vastly disproportionate and unreasonable, suggesting that authorities’ incentive is to instil fear and intimidation rather than act in the interest of the public.

This year, the Malaysian government has ramped up its attacks on civil society. Two artists have been investigated for their online activism, a news outlet was held liable for third-party comments on its website, and at least ten human rights defenders and political activists have been summoned for peacefully protesting.Fahmi Reza—one of the panellists—has been targeted because of his political art and satirical commentary. In March he was questionedover two caricatures of Health Minister Datuk Seri Dr Adham Baba that he posted on multiple social media platforms. He was investigated under the Penal Code’s defamation provisions and the Communications and Multimedia Act. In April he was arrested and detained for 24 hours after uploading a playlist of songs on the streaming platform Spotify that satirized a comment Malaysia’s queen made on Instagram. Police questioned him in relation to alleged violations of the Sedition Act as well as the Communications and Multimedia Act. In May—his third consecutive month of police harassment—Fahmi was investigated under the Penal Code and the Communications and Multimedia Act in relation to another caricature of the Health Minister.

Political cartoonist Zulkiflee Anwar Haque (known as Zunar) was summoned in relation to a cartoon depicting the Chief Minister of Kedah and in May was questioned by police. He was investigated under the Penal Code for allegedly inciting crime against a community and under the Communications and Multimedia Act.

Online news outlet Malaysiakini—whose editor-in-chief and co-founder Steven Gan was another panellist—was convicted in February on contempt of court charges and fined heavily for third-party comments posted in the public comments section of the Malaysiakini website.

Eight individuals were called for questioning over a spontaneous gathering in April in response to the arbitrary arrest of political artist Fahmi Reza, and five were summoned in response to an annual Labour Day celebration held on 1 May. They were investigated under the Peaceful Assembly Act.

The Sedition Act has also been criticised extensively by civil society for being illegitimately deployed to suppress critical dissent in Malaysia. Human rights groups have regularly called for the abolishment of the Sedition Act to ensure compliance with Malaysia’s international human rights obligations. The UN has also made continued calls for Malaysia to uphold promises to repeal the law made at the UN Human Rights Council in 2013 and UN General Assembly in 2018.

The Peaceful Assembly Act imposes overly burdensome requirements on assembly organisers and effectively prohibits protesters from rapidly organising assemblies in response to unexpected political or social events.  These problematic provisions, along with defamation and national security-related crimes under the Penal Code, are frequently used to discourage public participation and intimidate protesters.

Malaysia’s legal framework is potholed with flawed provisions that are frequently manipulated to unjustly restrict freedom of expression and information. While limitations may be legitimately imposed on the right to freedom of expression in certain, narrow circumstances, the UN Human Rights Committee has clarified that where matters relate to public interest and commentary on public institutions, “the value placed on uninhibited expression is particularly high” and that criminal sanctions should not be imposed. The Committee has also highlighted that “all public figures, including those exercising the highest political authority such as heads of state, are legitimately subject to criticism and political opposition.” This extends to members of the royal family.

Moreover, laws and policies that punish internet intermediaries for third-party content are incompatible with the right to freedom of expression.

The re-tabling of “fake news” provisions through Emergency Ordinance (No. 2) and the escalating actions of authorities to censor critical voices online reflects a deterioration in rights protection in Malaysia. The Malaysian government must reverse course.

We call upon the Malaysian government to