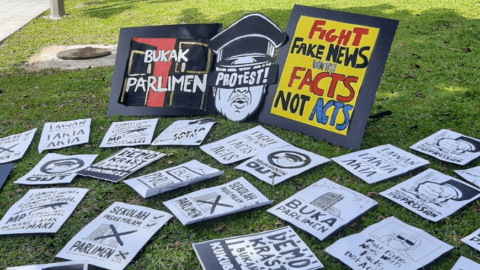 Malaysia should immediately repeal a new emergency regulation on ‘fake news’ relating to the Covid-19 pandemic, said ARTICLE 19, the ASEAN Parliamentarians for Human Rights (APHR) and Open Net Association today. The new ordinance draws heavily from the Anti-Fake News Act, a repressive law that was repealed in 2019, and is likely to be used by the government to restrict freedom of expression in a manner that violates international human rights law.

On Friday, the Perikatan Nasional government enacted Emergency (Essential Powers) (No. 2) Ordinance 2021 (the ‘Ordinance’) using powers conferred by a January 2021 Emergency Proclamation. The Ordinance establishes a number of criminal offences relating to ‘fake news’ about the Covid-19 pandemic and the Emergency Proclamation, which was promulgated for the stated purpose of combating the Covid-19 pandemic and is effective until 1 August 2021.The new offences include the creation, publication, or dissemination of so-called ‘fake news’ and the failure to take down publications containing content deemed as ‘fake news’.

The Ordinance was promulgated without parliamentary approval, as the legislative body has been suspended during the state of emergency, leaving the country without democratic oversight for several months. Moreover, that the Ordinance punishes ‘fake news’ relating to the proclamation further raises the risk of suppressing meaningful public discussion on the legitimacy of the proclamation or the political crisis brought on by the suspension of parliament.

The Ordinance draws heavily from the Anti-Fake News Act 2018. It follows the structure of the Act, and many provisions in the Ordinance are identical to those in the Act. In 2018, Malaysian civil society and international human rights organisations, including ARTICLE 19, raised concerns that the Act was incompatible with international human rights law and would be used to censor speech and punish government critics. In October 2019, the Malaysian Parliament repealed the law. Not only does the Ordinance replicate many of the most problematic aspects of the Anti-Fake News Act, it also adds new provisions that raise fresh concerns.

The right to freedom of expression is protected by customary international human rights law. Although it may be restricted in order to protect national security, public order, or other legitimate aims, such restrictions must be prescribed by law and necessary and proportionate to those aims.

In the past year, ARTICLE 19 has documented how the government has used various law to restrict freedom of expression and harass journalists and human rights defenders in Malaysia. Given the breadth of powers under the Ordinance, it will likely be used to further suppress public discourse and legitimate criticism of public officials and other powerful individuals.

Problematic aspects of the Ordinance include the following:

While it is important for authorities to prevent the spread of disinformation, and ensure accurate information about the coronavirus, there are steps that the government of Malaysia could take to tackle disinformation that are less threatening to free speech. As well as investing in public awareness campaigns about the pandemic, it could adopt longer-term measures such as promoting media and digital literacy, incorporating the subject into school curriculums, and engaging with relevant civil society actors.

The Ordinance is deeply flawed, unnecessary, and fundamentally incompatible with international human rights law. It should be immediately repealed in its entirety.

Parliament should be convened as soon as possible to review emergency measures and ensure government accountability.

The Malaysian government should additionally initiate a program of legislative reform to bring its legal framework in line with international standards relating to freedom of expression. In particular, the government should repeal the Sedition Act 1948, amend the Communications and Multimedia Act 1998, and consider legislation protecting online intermediaries from criminal and civil liability for third party content. The Malaysian government should also ratify without delay the International Covenant on Civil and Political Rights, which protects the right to freedom of expression.