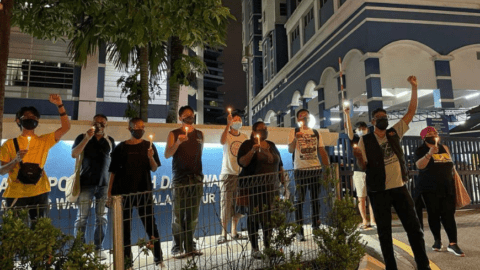 Malaysian authorities must stop harassing peaceful protesters, human rights defenders, and activists, said ARTICLE 19. The police have initiated investigations into ten individuals under Section 9(5) of the Peaceful Assembly Act in relation to their peaceful protest activities in recent weeks. Additionally, two artists have been investigated for their online activism. The Malaysian government should reform the Peaceful Assembly Act to bring it into compliance with international human rights law and take steps to ensure that all Malaysians enjoy the rights to freedom of expression and assembly in practice.

“New investigations are being opened against activists and artists at a shocking pace,” said Matthew Bugher, ARTICLE 19’s Head of Asia Programme. “This latest wave of cases demonstrates the authorities’ determination to control public discourse and suffocate dissent.”

Additionally, police summoned five individuals in response to an annual Labour Day celebration held on 1 May 2021 to raise concerns about workers’ rights and to call for job security for labourers. The group includes two more PSM Central Committee members, Sivarajan Arumugam and Nik Aziz Afiq, as well as three individuals who are also being investigated for the 24 April assembly.

Today, eight of those summoned will present themselves at the Dang Wangi police station for investigation.

The government’s crackdown on peaceful protesters has extended beyond Kuala Lumpur. On 24 April, authorities arrested six men under Section 188 of the Penal Code, Section 9(5) of the Peaceful Assembly Act, and Section 25 of the Emergency Ordinance 2021 during a peaceful demonstration held in Kampung Muhibbah Raya, Tawau. The group was protesting the Enhanced Movement Control Order to contain the spread of COVID-19, which has threatened the food security of the population. The individuals were subsequently released on bail.

The Peaceful Assembly Act impedes the exercise of fundamental freedoms that are guaranteed by Malaysia’s Constitution and protected by international human rights law. The law imposes overly burdensome requirements on assembly organisers and requires that they notify authorities five days prior to a gathering. Protesters who fail to comply with the law’s requirements face fines of up to RM 20,000. Crucially, the law does not provide for any exceptions to the notification requirement, effectively prohibiting protesters from rapidly organising assemblies in response to unexpected events such as the detention of Fahmi. The UN Special Rapporteur on freedom of assembly and association has stated that notice periods should not exceed 48 hours and that notice should only be required for large or disruptive assemblies. He has also advised that authorities must accommodate spontaneous assemblies.

“Protest empowers people to make their voices heard beyond the ballot box. It is a fundamental right and must be given the utmost protection,” said Bugher. “The Malaysian government should amend the Peaceful Assembly Act to ensure that it facilitates, rather than impedes, the right to peaceful assembly.”

The investigation of peaceful protesters is part of a broader crackdown on freedom of expression by authorities. Fahmi Reza, whose arrest sparked the police station protest on 24 April, has been targeted because of his political art and satirical commentary. On 4 May 2021, police asked Fahmi to hand over his Twitter username and password to aid their investigation. Political cartoonist Zulkiflee Anwar Haque (known as Zunar) was summoned in relation to a cartoon depicting the Chief Minister of Kedah and on 7 May was questioned by police, who confiscated his phone.

“The frequent impulse of public officials to suppress political art demonstrates the centrality of freedom of expression to democracy and government accountability,” said Bugher. “Artists like Fahmi and Zunar make public life more colourful and challenge Malaysians to think more deeply. They should be in their studios not in police stations or behind bars.”