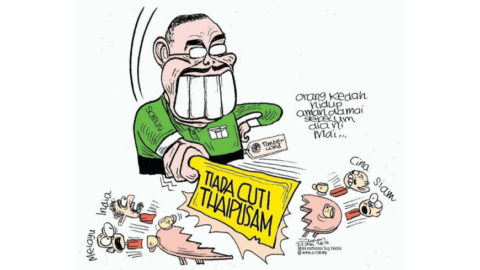 Cartoon by Zunar, published on the Facebook Page ZunarCartoonist.

Police today summoned political cartoonist Zulkiflee Anwar Haque (known as Zunar) to the Padang Terap district police headquarters in Kedah on 2 May 2021 in relation to a cartoon he published on his Facebook page in January 2021. The cartoon depicts Chief Minister of Kedah Muhammad Sanusi Md Norm using a large knife to split apart a group of four people representing different races. The cartoon responds to the Kedah state government’s decision not to grant a public holiday for Thaipusam—an annual Hindu festival—and the cancellation of all festival activities under the Movement Control Order.

Zunar is being investigated under Section 505c of the Penal Code for inciting crime against a community and Section 233 of the Communications and Multimedia Act (CMA) for disseminating ‘obscene, indecent, false, menacing, or offensive’ communications online. The arbitrary application of the CMA to silence government critics has been a hallmark of the Malaysian government’s rule over the past year, as documented in a recent report by ARTICLE 19 and CIVICUS. Last week, police arrested Fahmi Reza, an activist and artist, in relation to a satirical commentary and Spotify playlist poking fun at recent comments by the Queen.

“The investigation of Zunar is a further example of the Malaysian government’s intolerance of public criticism. The persecution of artists such as Zunar and Fahmi stifles creative expression, chills public discourse, and undermines trust in Malaysian authorities.”

“The CMA is one of the primary laws used by the government to target human rights defenders, activists, and politically-engaged Malaysians. By repeatedly turning to the CMA to target artists and activists, the authorities are signalling that criticism and political dissent is not permitted in Malaysia.”