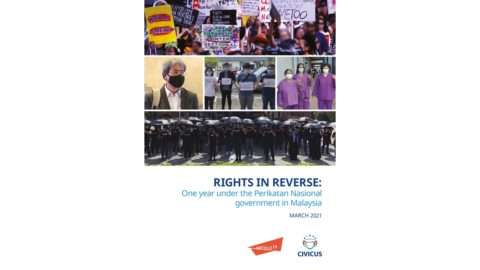 Malaysian people have experienced seismic upheavals in the past year. In late February 2020, the ruling Pakatan Harapan government collapsed amid surreptitious political manoeuvring. On 1 March 2020, Malaysia’s King appointed Tan Sri Muhyiddin Yassin as Prime Minister after determining that he commanded the support of a majority of elected MPs under the umbrella of the Perikatan Nasional coalition. The turnover in government marked a political sea change and the abrupt end to the reform agenda of the Pakatan Harapan government.

The ascendence of the Perikatan Nasional government coincided with the onset of the COVID-19 pandemic in Malaysia. The government implemented a strict Movement Control Order (MCO) that severely curtailed travel and social interactions. While the government’s efforts to stymie the spread of the virus have been successful in many respects, authorities have at times applied measures in a discriminatory manner and used the pandemic as an excuse to restrict human rights.

This report examines the Perikatan Nasional government’s record on fundamental freedoms during its first year in power. Specifically, the report considers the government’s actions against its obligations to respect, protect, and fulfil the rights to freedom of expression, peaceful assembly, and association. These rights are the focus of ARTICLE 19 and CIVICUS’s work in Malaysia. Last year’s change of government has proven to be a major setback for fundamental freedoms in Malaysia. While the Pakatan Harapan government’s track record on human rights was disappointing in many ways,1 it took some steps to roll back repressive laws and policies and was much more open to engaging with civil society and the human rights community than its predecessor. The Perikatan Nasional government has halted this progress.

During the first year of Perikatan Nasional rule, authorities have aggressively applied the Sedition Act 1948 and the Communication and Multimedia Act 1998 (CMA) against human rights defenders, journalists, political opponents, and ordinary members of the public. Criminal provisions under these laws have been used to investigate, arrest, charge, and convict individuals who have criticised government officials or Malaysian royalty or shared opinions about sensitive issues such as race and religion. The CMA has also been used to investigate more than 250 individuals alleged to have spread ‘fake news’ about COVID-19. Although the government is justified in its concerns about misinformation concerning the virus, the criminal penalties associated with offences under the CMA are disproportionate to the alleged threat and have a chilling effect on freedom of expression.

Journalists and media in Malaysia have routinely faced harassment, restrictions, and threats from the government over the past year. Online news outlet Malaysiakini was recently convicted of contempt of court concerning reader comments left under an article about the judiciary on its website. Authorities also launched an investigation of Al Jazeera journalists that produced a documentary on the treatment of migrant workers during the COVID-19 pandemic. The police stated that they were looking into possible sedition and criminal defamation offenses, as well as violations of the CMA. Other journalists have experienced harassment and death threats for reporting on the activities of government officials.

The space for peaceful protest has shrunk considerably under the Perikatan Nasional government. In the immediate wake of the collapse of the Pakatan Harapan coalition, police reportedly opened investigations into a least 20 individuals who protested the change in government or supported the protests on social media. The Perikatan Nasional government also arrested health professionals and human rights defenders protesting the lack of protective gear available to hospital workers and summoned activists for demanding justice for death-in-custody victims. Civil society organisations, human rights groups, and new political parties have found it increasingly hard to register themselves. Authorities at times added extra steps to the registration process, including requiring sign off from Special Branch police. The Registrar of Societies used its broad discretion to reject registration applications from groups whose goals diverged from – or conflicted with – the government’s.

The deterioration of fundamental freedoms under the Perikatan Nasional government has been underscored by its complete abandonment of the previous government’s legislative reform agenda. The government has taken no concrete steps to reform laws that are incompatible with the rights to freedom of expression, peaceful assembly, and association, including the Sedition Act, CMA, Peaceful Assembly Act, and Societies Act. In some cases, government officials have explicitly or implicitly affirmed their intention to continue to apply the most repressive provisions in these laws. In other cases, the government has remained silent on its intentions. The lack of transparency in the government’s agenda has hamstrung civil society engagement on legislative affairs. For these reasons, Malaysia is rated as ‘obstructed’ by the CIVICUS Monitor, a global platform tracking civic space.

The Perikatan Nasional government must choose a different path in its second year. It should impose a moratorium on the most repressive provisions criminalising freedom of expression and assembly. The government should also take steps to end the arbitrary application of the law against political opponents and government critics. In the long term, protecting fundamental freedoms will require a sustained, principled program of reform to bring Malaysia’s legal framework in line with international human rights standards. These priorities should anchor the government’s agenda in the year to come.