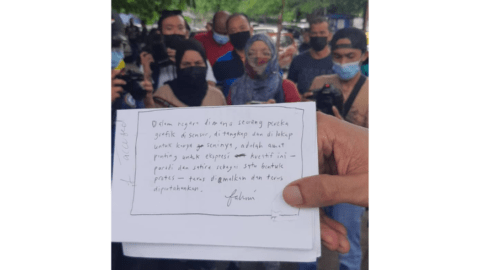 Malaysian authorities should cease their harassment of activist and artist Fahmi Reza, who was arrested yesterday in relation to satirical online commentary about the Queen, said ARTICLE 19. The latest investigation of Fahmi, who was also summoned by police in March, is a further example of the government’s use of Malaysia’s legal framework to harass activists and stifle political commentary.

Fahmi Reza was arrested yesterday under Section 4(1) of the Sedition Act and Section 233 of the Communications and Multimedia Act. A group of police officers forcibly entered Fahmi’s home last night, leaving a hole in his front door. Fahmi is currently being detained at Dang Wangi District Police Headquarters and is set to be released this evening. This is not the first time Fahmi has experienced police harassment. In March he was questioned about political caricatures he posted on social media.

“The authorities should release Fahmi Reza from detention and end their campaign of harassment and intimidation against him and other independent-minded artists and activists,” said ARTICLE 19. “Satire is not a crime. Criminalising humour and critical commentary will stunt political discourse and chill civic engagement.”

Fahmi Reza is being investigated for satirical content posted on his Facebook page linking to a Spotify playlist, entitled ‘This Is Dengki Ke?’. The playlist contains 101 curated songs about jealousy with cover art depicting an image of Queen Tunku Hajah Azizah Aminah Maimunah Iskandariah and the description ‘100 dengki songs, all in one playlist. Fuck censorship’. Spotify previously removed the cover image, title and description of the playlist on multiple occasions.

‘Dengki Ke?’ refers to an Instagram comment by the Queen. On 19 April 2021, Instagram users asked the Queen if her chefs had been vaccinated, to which she allegedly replied with “Dengki ke?”, which translates to “You jealous?”. Subsequently, the Queen deactivated her Instagram account, while the hashtag #DengkiKe began trending on Twitter.

Fahmi faces investigation under the widely criticised Sedition Act and Communications and Multimedia Act—pieces of legislation that have been aggressively applied by the authorities against human rights defenders, journalists, political opponents, and members of the public. They serve to protect the most powerful institutions—often referred to as the 3Rs: race, religion and royalty—while arbitrarily restricting criticism, dissent, and in Fahmi’s case, political satire. These ambiguously worded laws are highly vulnerable to abuse. They have frequently been applied arbitrarily to suppress criticism of the government or monarchy.

“Fahmi’s arrest reminds us that the campaign to abolish the Sedition Act and Section 233 of the Communications and Multimedia Act must continue,” said ARTICLE 19. “These laws threaten artists, activists, and ordinary Malaysians who wish to express a controversial opinion or simply make a joke at the expense of a powerful individual.”