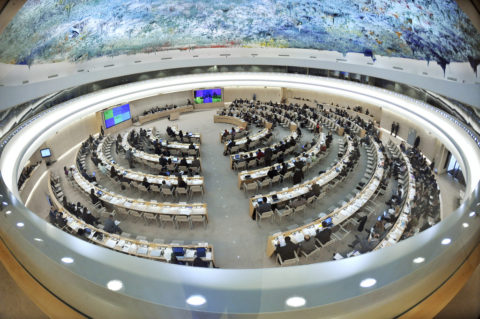 Today, the UN Human Rights Council began its 45th Session in Geneva (HRC45). At HRC45, States will have the opportunity to progress international standards on pressing issues for the freedom of expression, including the safety of journalists.

As HRC45 commences, it is more important than ever to mobilise UN action against human rights violations. Across the globe, journalists, human rights defenders, protestors and other civil society actors are facing rising attacks and harassment for their expression of dissent or political opposition. A crackdown on protests in Belarus, upcoming elections in Myanmar, and an increase in repressive laws in Cambodia, all show the vital importance of maintaining a focus on free expression.

ARTICLE 19 will be working to ensure the resolution addresses a number of pressing issues facing journalists worldwide, such as restrictive accreditation or licensing schemes, meritless civil claims, gender-based reprisals and violence, and threats to those observing, monitoring, recording and reporting on protests. These concerns all serve to undermine safety and work of journalists, ultimately obstructing the free flow of information within societies and denying the public of their right to know.

However, commitments on paper are not enough. States must increase and accelerate their efforts to implement these resolutions in law, policy, and practice in order to ensure a safe and enabling environment for journalists to carry out their work.

At the previous session of the Council, ARTICLE 19 and Belarus Free Theatre urged the Belarusian authorities to lift all restrictions in law and practice on the right to freedom of expression. Since then, however, the situation has deteriorated significantly. The UN must now take action.

Following disputed elections in Belarus, the government has responded to widespread protests with the use of excessive force against protestors, alongside attacks and arbitrary detention of journalists and members of the political opposition. This has taken place amid frequent internet shutdowns and blocking of websites – a flagrant violation of international standards – designed to impede the free flow of information in the country.

At HRC45, we will join a broad coalition of Belarusian and international civil society organisations to take part in the urgent debate on Belarus, and to call for a resolution which mandates the High Commissioner for Human Rights to pursue documentation and recommendations to the international community related to human rights issues in Belarus.

At HRC45,the Working Group on Arbitrary Detention present its annual report and take part in an interactive dialogue. The report details cases of arbitrary detention worldwide and analyses emerging thematic concerns, including a focus on women deprived of their liberty.

The arbitrary detention of journalists, media workers and others continues to threaten freedom of expression across the globe. Turkey, for example, remains one of the worst offenders for jailing journalists worldwide. Around 89 journalists and media workers are currently in detention simply for conducting their vital work, including Ahmet Altan and Nedim Turfent, despite facing unprecedented health risks from overcrowded facilities amidst the current pandemic.

All States must engage closely with the findings and recommendations of the annual report, and take action to end the use of arbitrary detention to silence journalists and government critics.

Myanmar will also be on the agenda at the upcoming session, with both the High Commissioner and Special Rapporteur on Myanmar presenting reports on the human rights situation in the country.

ARTICLE 19’s UPR report on Myanmar detailed how the government continues to prosecute journalists, human rights defenders and others using a variety of repressive laws. The rapid increase in internet usage in the past five years has been met with restrictions that do not comply with international human rights law, including ongoing internet shutdowns. At the same time, the government has failed to pass comprehensive right to information legislation and has instead passed laws that entrench secrecy.

With upcoming elections scheduled for 8 November, the government that was elected on the promise of reforms has only heightened repression of freedom of expression, imposing severe restrictions on candidates, voters, and the general public.

ARTICLE 19 urges States at HRC45 to take the opportunity to call on Myanmar to respect its international commitments on freedom of expression, particularly with elections on the horizon.

The Special Rapporteur on Cambodia will also make an intervention at the session. In recent years, the Cambodian government has systematically cracked down on civil society, human rights defenders, independent media and political opposition in the country.

On top of this, the COVID-19 pandemic has been used as an excuse to adopt an unnecessary and draconian state of emergency law that gives the authorities further broad and unfettered powers to restrict freedom of expression, peaceful assembly and association. This serves as a testament to the Special Rapporteur on freedom of expression’s recent report which anticipated that the virus could become a “pathogen of repression”, with governments using the pandemic as an opportunity to intensify repressive measures.

The upcoming session is an especially pertinent opportunity for scrutiny ahead of a proposed Law on Public Order which contains an extensive array of provisions criminalising legitimate everyday activities. We recently joined a broad coalition of civil society organisations raising serious concerns at how this law violates core principles of international human rights law.

It is absolutely crucial that States maintain their scrutiny of the Cambodian authorities’ human rights record to prevent further repressive measures being taken.

The Council will also consider a resolution on terrorism and human rights. This coincides with the High Commissioner for Human Rights presenting a new report on the topic, calling for responses to the threat of terrorism and violent extremism to be grounded in respect for the rule of law and human rights. With the review of the UN Global Counter-Terrorism Strategy recently postponed and still on the horizon, now is the time to underline respect and protection of human rights.

Finally, the Council will adopt a number of Universal Periodic Review (UPR) outcome reports at the session, including Kenya, Kyrgyzstan and Turkey. Together with partners, ARTICLE 19 previously raised our serious concerns regarding the ongoing restrictions on freedom of expression in these countries.

We will be calling on States to push for the acceptance of all recommendations related to freedom of expression, and to monitor their implementation in the coming years. States who champion human rights must make full use of the UPR process to drive forward action at the national level to truly ensure the protection of freedom of expression.

During HRC45, follow @article19un for live updates and use #HRC45 to join the discussion. You can also check out our full coverage of the session here.