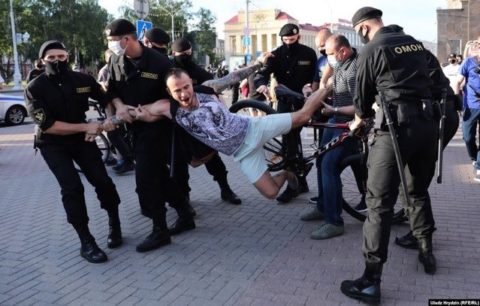 ARTICLE 19 and Belarus Free Theatre’s full statement for the interactive dialogue with the UN Special Rapporteur on Belarus at the 44th Session of the Human Rights Council. The Special Rapporteur’s report assessed many human rights violations in the country, including the systematic harassment of journalists and bloggers.

We urged Belarus authorities to lift all restrictions in law and practice on the right to freedom of expression, and cease the harassment and arbitrary detention of independent journalists, bloggers and human rights defenders.

We thank the Special Rapporteur on Belarus for her timely report, especially with presidential elections on the horizon in August. Across Belarus, people are calling for change through peaceful protest. Over the last month, more than 700 people have received administrative arrests and fines, and there are currently more than 30 people in jail charged with criminal offences – all for exercising their basic human rights of assembly and freedom of expression.

Special Rapporteur, we join you in deploring the systematic harassment of journalists and bloggers in the country. This assault on freedom of expression is designed to silence all media workers into self-censorship.

On 11 and 12 May, four journalists covering the protests, Ales Asiptsou, Alexander Burakou, Mikhail Arshynski and Zmitser Lupach, were found to have violated Article 23:34 of the Administrative Code for participation in a so-called “unauthorised mass event”. They were sentenced to between 10 and 21 days in prison.

On 19 June, journalist Alexandra Dynko and cameraman Andrei Rabchyk were arrested live on air while streaming the only coverage of the protest. On that day, mobile services were blocked across the country, reminding us of internet shutdowns in 2010 which concealed mass human rights violations.

Since June, at least eight bloggers, including Ihor Losik, Serhei Petrukhin, Aleksandr Kabanau, Volodimir Neronski, Aleksandr Andreyev, Volodimir Tsiganovich, Dmitry Kozlov and Serhei Sparish, have been arrested and charged under Article 342 of the Criminal Code which vaguely penalises “organisation and preparation of actions that grossly violate public order”. They now face up to 3 years in prison.

This Council has repeatedly asserted that journalism is not a crime. All States devoted to media freedom must urge Belarus to implement the Special Rapporteur’s recommendations to lift all restrictions in law and practice on the right to freedom of expression, and cease the harassment and arbitrary detention of independent journalists, bloggers and human rights defenders.