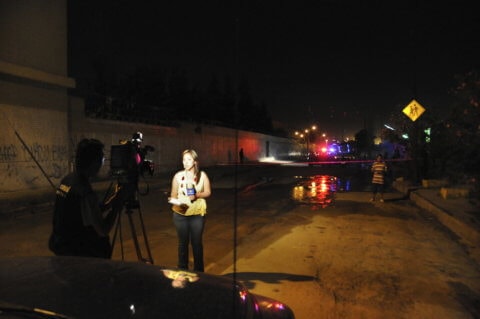 A television journalist reports from a crime scene in the border town of Ciudad Juarez, which is plagued by drug related violence. Drug cartels fight over control of lucrative smuggling routes while smaller gangs fight each other over territory.

ARTICLE 19 welcomes the adoption of a new resolution on the safety of journalists at the UN Human Rights Council in September 2018.

The resolution focuses on creating an enabling environment for the media, including by calling on political leaders to stop denigrating journalists and reinforces international criticism of political leaders who have sought to undermine trust in independent media.

Among numerous other commitments, the resolution provides actions for States to end impunity for attacks on journalists, cease abusive application of defamation laws to silence criticism, and bolster digital security. It is by far the most comprehensive UN resolution on this topic to date.

HRC resolution 39/6, led by a cross-regional core group of Austria, Brazil, France, Greece, Morocco, Qatar, and Tunisia, was adopted without a vote by the 47-member Human Rights Council (HRC) on 27 September 2018 at its 39th Session. It is the fourth HRC resolution on safety of journalists, as part of a series dating back to 2012. 82 States supported the resolution as cosponsors.[1]

The resolution comes at a critical time. With three journalists killed within the European Union and four in the US in the last year, we are witnessing more diverse and greater threats to journalists than ever before. The resolution’s call for political and principled leadership from governments to protect journalists and end impunity for their attackers has unprecedented and universal relevance.

According to UNESCO’s most recent global trends report, 530 murders of journalists were recorded between 2012 and 2016, with the rate of impunity for those killings at a staggering 90%. These statistics are just the tip of the iceberg. At the 39th Session of the Human Rights Council, in addition to impunity for cases of murder, ARTICLE 19 raised numerous cases of enforced disappearances, arbitrary arrests and detentions, torture, and unlawful surveillance.

UN resolutions on the issue of journalists’ safety are important. In the six years since the first resolution on this topic, States have made increasingly detailed human rights commitments. Each new resolution has built upon issues and negotiations from previous iterations, highlighting States’ priorities relating to freedom of expression. In many cases they mark unprecedented global commitments by States to act on a particular issue.

Closing the implementation gap between States’ international commitments and national realities remains a challenge. This new resolution is an important advocacy tool for that purpose, and must be leveraged to increase pressure on national governments to take action on both long-standing and emerging threats to journalists’ safety.

What is new in this resolution?

HRC resolution 39/6 places renewed emphasis on prevention. Its new and updated elements provide practical ways States can create a more enabling environment for a free, independent, pluralistic and diverse media to flourish – online and offline. This builds upon two HRC and UN General Assembly resolutions that focused on ending impunity and threats to women journalists, respectively.

This resulting resolution takes a more holistic approach to journalists’ safety, underscoring that a range of threats, whether physical, legal, political, technological or economic in nature, must be addressed to secure a positive role for the media in our societies. In this respect, the resolution reflects many of the themes of the 2018 Joint Declaration of international and regional freedom of expression mandates on media independence and diversity in the digital age, which ARTICLE 19 coordinated.

Of several new calls in the resolution for action, five are significant:

The resolution expresses alarm at instances where political leaders, public officials and authorities have denigrated, intimidated, or threatened the media, including individual journalists. It urges them to refrain from such actions. Implicitly denouncing politicians who label media they don’t like as “fake news”, the resolution clarifies that these attacks aren’t simply rhetorical; they expose journalists to greater risks, and undermine public trust in the credibility of journalists and respect for their independence. While the resolution recognizes disinformation and propaganda as challenges, it emphasises that the media play a positive role in countering that trend. This was the focus of UN and regional freedom of expression mandates in their 2017 joint declaration.

The resolution integrates language from a 2017 General Assembly resolution “condemning unequivocally” specific attacks on women journalists and media workers, calling for action against sexual and gender-based violence, threats, intimidation and harassment, online and offline. It also includes concerns about the targeting of journalists’ family members, a form of attack that is often gendered and disproportionately targets women. It specifies that States’ prevention and investigative measures must be gender-sensitive, in particular to encourage reporting of online and offline attacks against women journalists, which are often underreported.

The resolution raises concern at the misuse of defamation and libel laws for silencing journalists, in particular where criminal sanctions are used. It calls for laws to be revised or repealed in line with international human rights law, which strongly favours decriminalisation and requires strong safeguards for journalists’ freedom of expression rights in civil cases. This builds upon earlier calls from the Human Rights Council for the revision of counter-terrorism laws, and for the unconditional release of all arbitrarily detained journalists. It asserts the importance of legal reform to ensuring a safe and enabling environment for media.

The resolution fleshes out previous calls on States to cease and refrain from deliberate measures to prevent or disrupt Internet access, specifying that this includes “measures to unlawfully or arbitrarily block or take down media websites”. Denial-of-service attacks are singled out as an example, though the principle applies broadly to any State action to block media websites against international human rights law, including through executive or judicial means. The resolution states that these measures cause “irreparable harm to efforts at building inclusive and peaceful knowledge societies and democracies”, pointing to Goal 16 of Agenda 2030 for Sustainable Development.

In a first for the HRC, the resolution raises freedom of expression and privacy concerns around government-sponsored hacking. This builds upon previous calls on States to refrain from using unlawful or arbitrary surveillance techniques to circumvent journalists’ efforts to secure their communications, including their communications with confidential sources, specifying for the first time this may include whistleblowers. The resolution repeats earlier calls for legislation to protect the confidentiality of journalists’ sources. While emphasising encryption and anonymity tools are “vital” for journalists, the resolution is the clearest indication yet that deliberate attempts to undermine these tools, including to expose journalists’ sources, violate international human rights law. This responds to concerns raised by the UN Special Rapporteur on freedom of expression in a 2018 research report on encryption, and reinforces our calls on the Mexico government to investigate their use of spyware against journalists and human rights defenders.

While HRC Resolution 39/6 reflects changing realities facing journalists, it also demonstrates that in important respects, many threats are the same now as they were when this initiative began in 2012. At its core it strongly condemns the prevailing impunity for attacks and violence against journalists, and calls for national strategies to address this crisis.

As with its predecessors, HRC Resolution 39/6 sets out how strategies must include actions to prevent, protect against, and prosecute attacks on journalists. Though the core group of States behind this initiative sought to focus the latest resolution on prevention, mainly elaborating the elements above, they also consolidated and in places strengthened existing calls for protection and prosecution.

In relation to protection and prosecution, the resolution calls on States to do more to:

The resolution prioritises national action to address the safety of journalists, to close the gap between international commitments and national realities. Those commitments, and the multiple and overlapping international and regional mechanisms for monitoring and accountability, have been mapped out in a recent OHCHR report.

The resolution expressly calls for States to more effectively implement their obligations and engage with these mechanisms, to take action not only on HRC Resolution 39/6, but also on UNESCO’s Plan of Action on the Safety of Journalists, as well as recommendations from UN treaty bodies, special procedures, the Universal Periodic Review, and regional bodies.

The resolution makes clear that these actions are also essential to achieving peaceful and inclusive societies under Goal 16 of the 2030 Agenda for Sustainable Development. It calls on States to engage with target 16.10 and indicator 16.10.1, and “do their utmost” to make available to OHCHR and UNESCO data on verified cases of killing, kidnapping, enforced disappearance, arbitrary detention, torture and other harmful acts against journalists and associated media personnel. This must supplement, and not replace, reporting to UNESCO on the status of investigations in attacks.

The International Day to End Impunity for Crimes against Journalists, to be marked on 2 November, will be an important date for States to launch concrete initiatives on safety of journalists. It is critical that all countries commit to translating HRC resolution 39/6 commitments into meaningful legal reforms and policy changes at the national level. Furthermore, States at the UN Human Rights Council, in particular those who claim to be friends of journalists, must speak out publicly and unequivocally against persistent violators.