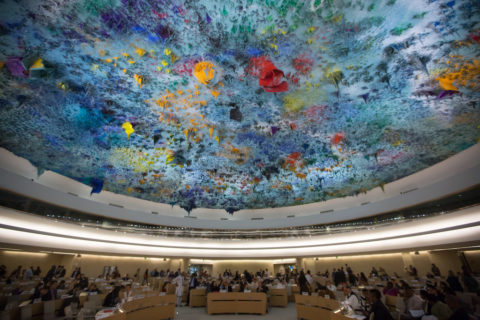 ARTICLE 19’s full statement for the interactive dialogue with the UN Special Rapporteur on freedom of opinion and expression at the 44th Session of the Human Rights Council. The Special Rapporteur’s annual report expressed concern that measures taken by States to combat COVID-19 often fail to reach the international standards of legality, necessity and proportionality.

ARTICLE 19 commends the Special Rapporteur for his report. The COVID-19 virus emerged into environments already fraught with censorship and denigration of dissent or political opposition. As the virus has spread around the globe, too many States have taken the wrong path and used the pandemic as an opportunity to intensify repression of freedom of expression. From mass arrests of journalists and activists to internet shutdowns, we fear that the virus has too often become a “pathogen of repression”.

In Thailand, emergency measures banning public gatherings and containing vague prohibitions on ‘false news’ have been used to initiate criminal proceedings against dozens of peaceful protesters and ordinary citizens. This includes 3 activists from the Student Union of Thailand who have faced arrests, surveillance and other forms of harassment for participating in a rally concerning the disappearance of an exiled activist. The Emergency Decree has been repeatedly extended, despite there being no domestically transmitted case of COVID-19 recorded in more than a month.

In Turkey, the pandemic has been used as a pretext to further crackdown on dissent, with several journalists and scores of social media users arrested under vague notions of “causing fear and panic in society”. Over 102 journalists and media workers remain in detention with unprecedented health risks, including Ahmet Altan and Nedim Turfent, despite the release of tens of thousands of other prisoners from overcrowded facilities amidst the pandemic.

In Kyrgyzstan, a new Law on Manipulating Information has been passed during the COVID-19 State of Emergency without full parliamentary scrutiny. The law, premised on combatting misinformation, contains a number of overbroad and vague terms and gives the authorities the power to block access to internet sites and shut down social media accounts without any due process.

In Brazil, the deterioration of the socio-economic situation due to a lack of governmental responsibility and management on the pandemic has led to online and offline protests, including demonstrations from health professionals. In Rio de Janeiro,10 health professionals have been detained by the police.

In Mexico, the crisis has exposed the existing fractures in the protection of journalists. Since the beginning of the pandemic, 2 journalists have been killed and more than 180 have been attacked. In 69% of cases, the main aggressors were State agents.

In other countries across Central America – including El Salvador, Guatemala and Honduras – legal mechanisms and decrees have been used to infringe disproportionate and unnecessary restrictions on freedom of expression, while attacks on human rights defenders and journalists have been accentuated during the crisis.

We remind this Council that all measures taken in response to the pandemic must meet the standards of legality, necessity and proportionality.

Special Rapporteur, ARTICLE 19 takes this opportunity to thank you for your invaluable contributions to the promotion and protection freedom of expression. Over the past six years, your cutting-edge reports – on issues from anonymity and encryption, to online content regulation, to surveillance – have shaped progressive international standards, particularly for the digital age.