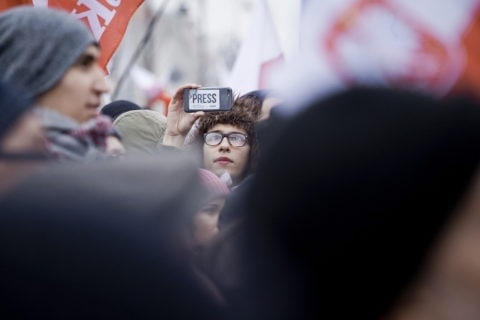 This article was first published on Deustche Welle Freedom.

Each year, celebrations of World Press Freedom Day are marked by an unavoidable reality: around the world, journalists continue to work under attack, media houses continue to fight the threat of closure, and the public’s access to a free and critical press is restricted. In 2018, a report on global freedom of expression by ARTICLE 19 found that media freedom was at its lowest point for a decade. This is the case no matter what region we look at – whether it’s the killing of nine journalists and two media workers in Mexico in 2018, or the imprisonment of 146 journalists and counting in Turkey.

Since 2012, landmark resolutions at the UN, have shown commitments to prevent attacks on journalists through creating an open and enabling environment for the media to flourish, tackling gender-based attacks on women journalists and ending the blockage and criminalisation of media reporting. States have agreed to protect journalists from attacks, as well as, vitally, to punish those responsible to make clear that perpetrators will be held to account.

These commitments have been hard fought by press freedom advocates, but, as more and more high-level international agreements have been made, the promises they contain have begun to sound empty. The problem, as ever, is the political will to implement change. Countries willing to take progressive action on journalists’ safety at the international level have made few real changes at home. Many of those supporting these progressive resolutions at the UN are serial jailers of journalists, let attacks on the press go unpunished, or use restrictive national laws to throttle a free press. Governments at the UN have acknowledged that risks faced by journalist are increasingly fuelled by denigrating comments against the media by those in power, who elsewhere pledge their commitment to press freedom.

In Mexico, for example, where a Special Prosecutor for crimes against freedom of expression was set up in 2010, impunity for those who murder, attack and threaten journalists continues to sit above 99%. In 2012, the Mexican government created the Federal Mechanism to protect human rights defenders and journalists. In 2018, ARTICLE 19 and other human rights organisations developed a Protocol to investigate all the crimes against Freedom of Expression, enacted by the government a month later. It requires authorities to use it to guide their investigations into violence against the press. However, despite ongoing violence and threats, there is no record of authorities using the protocol and limited implementation of the other mechanisms to address attacks on press freedom. Rates of violence against journalists have not decreased, and in 2018, ARTICLE 19 documented 544 cases of violence against journalists, 42.2% of which were perpetrated by public servants.

In September 2018, after a sustained campaign by civil society, Brazil’s Ministry of Human Rights ruled to expand the mandate of its human rights defenders protection programme to protect individual’s working as ‘social communicators’ in Brazil, including journalists, bloggers and media workers whose work promotes or defends human rights. If this inclusion is an important step to recognize the specific violence suffered by journalists, its genuine implementation is still to be seen. The work of the mechanism is further undermined by continued efforts by President Bolsonaro and other high level authorities to delegitimise the work of journalists and attack those reporting critically on his presidency.

In Europe, the Council of Europe Platform on Safety of Journalists – which brings together international journalists’ and media organisations with freedom of expression advocacy groups like ARTICLE 19 – alerts member states on violations against journalists and monitors governments’ replies. In 2019, there was some room for optimism with constructive measures adopted in some member states to strengthen protection for journalists under threat. However, overall press freedom in Europe is more fragile now than at any time since the end of the Cold War. There is an urgent need for states to live up to their commitments by actively repealing repressive laws which are routinely misused to persecute the media – like criminal defamation, repressive counter-terrorism and anti-extremism laws.

It is clear then, across the world, that the essential factor in bridging the gap between the commitments made by governments and the ongoing impunity for attacks against journalists is the political will to actively protect journalists and prosecute violators of press freedom.

The UK government is set to launch a global initiative on media freedom this summer, aiming to drive forward global progress. To prevent abuses from continuing, governments including the UK need to be willing to commit to more than words. We have the tools, we have the standards, it’s time for action.