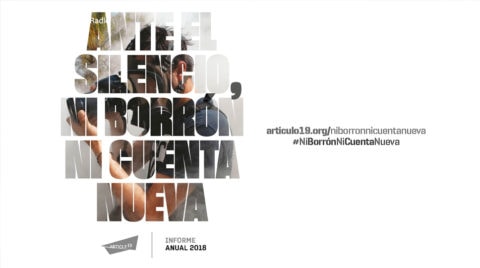 The last six years have seen hundreds of Mexican journalists permanently silenced by attacks. A new report by ARTICLE 19 on the state of free expression in Mexico, Ante el silencio, ni borrón ni cuenta nueva (In the face of silence, neither erasure nor revision), paints an alarming picture of freedom of expression under attack, with 544 attacks against journalists documented in the last year alone, and a rising threat to online expression.

After a new government took office on 1 December 2018, significant changes were promised in terms of “State transformation”, on corruption, impunity and poverty. This follows the murders of 47 journalists during the previous administration (2012-2018)[1]. The report sets out a clear guide for the new Government on how to bring about genuine transformation, providing specific recommendations on public policy, legislative modifications, structural strategies and positive measures/changes urgently needed to guarantee the safety of journalists and the media, the exercise of freedom of expression and information online and offline, and the right to the truth in a country struggling with a severe human rights crisis.

Journalists and media freedom under attack

In 2018, ARTICLE 19 documented 544 attacks against journalists and the press, all of them linked to their journalistic activity. These attacks included the murder of nine journalists and two media workers. Threats, harassment and intimidation (295 incidents documented) were the main forms of attack, followed by blocking of access, alteration and removal of content (72 incidents), physical attacks (65 incidents) and deprivation of liberty (30 incidents). Public officials remain the main perpetrators of violations against the press, representing 42.2% of the attacks.

Attacks against women journalists increased by 512% from 2012 to 2018. ARTICLE 19 documented 164 attacks during 2018, 23 of them particularly characterised as gender-based (that result from social roles and stereotypes assigned to women and cause differentiated violence), including 10 with sexual components. 21 percent of the attacks occurred online.

Mexico has 99.1% rate of impunity on cases of crimes against journalists and media workers which are under investigation by the Special Prosecutor for Attention for Crimes Against Freedom of Expression (FEADLE). The report details the lack of efficiency of the institutions like FEADLE that are legally obliged to guarantee freedom of expression, and the challenges facing the transformation of the new General Attorney’s Office.

The report also links the right to the truth with the significant debt still owed to Mexican society by the State, in terms of access to information on gross human rights violations cases. These include those from the past, such as the Tlatelolco massacre in 1968, and from the present, such as the Ayotzinapa disappearance of 43 students in 2014. The report emphasises the fundamental role that the National Institute for Transparency, Access to Information and Personal Data Protection (INAI) plays in the disclosure of official archives and public interest information, considering it a first step to know the truth and to build upon the State’s obligation to provide guarantees of non-repetition.

With regard to public advertising, the report reflects on how the Social Communication Law, enacted in 2018, is a regressive measure that negatively impacts on media pluralisms, democratisation of the media and freedom of expression in Mexico, as it legitimates the worst practices from the past regarding public advertising allocation. During the past administration (2012-2018), the Federal Government spending in public advertising reached 3.14 billion dollars, allocated without regulation nor criteria that enable expenditure accountability.

The report notes a new trend which has seen public officials blocking critical journalists and media from their social media accounts, particularly on Twitter. Two local courts and the Supreme Court of Justice have ruled, in 2018 and March 2019 respectively, that the blockage by public officials violates the journalists’ right to information and have recognised that the rights to freedom of expression and information are protected when they are exercised online.

Content removal requests made by State actors to companies such as Facebook, Twitter, Google and Youtube are also an increasing concern. Aside from the fact that Mexican authorities are requesting unwarranted removals or access restriction to information online, the report points out that the main motive they allege for each request is defamation, followed by “criticism of the government”, “electoral law”, and “fake news”, among others. The report shows that content removal requests are being used as a censorship mechanism by Federal and local authorities, clearly incompatible with the right to freedom of expression and information insofar that both authorities and companies lack proper transparency mechanisms and judicial oversight.

Read the report [in Spanish]