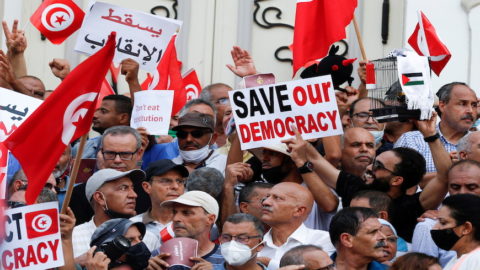 ARTICLE 19 calls on the Tunisian authorities to stop arresting bloggers, journalists and politicians for exercising their right to freedom of expression. ARTICLE 19 cautions against the danger of repeatedly prosecuting civilians before the military court in connection with freedom of expression issues, especially following President Kais Saied’s announcement of the state of exception and a decree granting him greater powers.

On 2 October 2021, police forces arrested journalist Amer Ayad and Member of Parliament Abdellatif Aloui in Tunis following their statements criticising the decisions of the President of the Republic in a TV programme broadcast on Al-Zaytouna TV, which is not in possession of a legal licence issued by the High Independent Authority for Audiovisual Communication (HAICA). Their lawyer, Mr. Samir Ben Amor, confirmed that the military court had charged them with calling for insurgence, degrading the morale of the military army, committing a denigrating act against the head of state, and attributing illegal matters to a public official.

ARTICLE 19 highlights the substantial legal protection that political speech enjoys in democratic societies, as the Human Rights Committee considered in its General Comment No. 34 of 2011:

“In circumstances of public debate concerning public figures in the political domain and public institutions, the value placed by the Covenant upon uninhibited expression is particularly high. Thus, the mere fact that forms of expression are considered to be insulting to a public figure is not sufficient to justify the imposition of penalties, albeit public figures may also benefit from the provisions of the Covenant. Accordingly, the Committee expresses concern regarding laws on such matters as lese majeste, desacato, disrespect for authority, disrespect for flags and symbols, defamation of the head of state and the protection of the honour of public officials (…)”.

Accordingly, the arrest of journalist Amer Ayad and MP Abdellatif Aloui constitutes a grave violation of Tunisia’s international commitments to human rights, in addition to violating the Tunisian Constitution, which enshrines the right to freedom of expression in Article 31.

ARTICLE 19 also denounces the prosecution of civilians before the military court for expression of their opinions and calls for avoiding the application of the penal code and the code of the penal and military procedures in prosecuting journalists and politicians who express their opinions and positions, and using instead the provisions of Decree-law No. 115 related to freedom of the press, printing and publishing.

Read more about the trial of civilians before military courts

For more details on developments in the political situation in Tunisia since the announcement of the state of exception, see:

Tunisia: A grave step in the wrong direction

For press queries or to arrange an interview with an ARTICLE 19 expert, please email: [email protected]