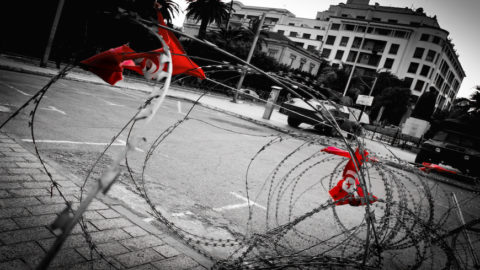 ARTICLE 19 condemns a new decree granting Tunisian president Kais Saied power over the three branches of government as it poses a serious threat to human rights and will thwart democratic reform in the country.

The Presidential Decree[1], issued on 22 September 2021,is part of a set of exceptional measures to tackle instability in the country, including ongoing protests two months on from the suspension of parliament and the dismissal of the prime minister.

On 25 July 2021, the president declared a “state of exception” based on  the provisions of Article 80 of the Constitution, yet it effectively abolishes the current constitution, dismantling the separation of powers. The new decree dismantles the power of the legislative, allowing the President to legislate directly, bypassing the Assembly of the People’s Representatives without appropriate accountability, while it grants the President oversight over the judiciary.

ARTICLE 19 is also alarmed that although the powers the decree grants are stated as temporary, no time limit has been specified, increasing the ambiguity of the process and prompting fears about its consequences.

The decree allows for continued suspension of the Assembly of the People’s Representatives, lifting deputies’ immunity so that they can face prosecution and introducing a procedure that will block salary payments to the assembly chairman and other members. Also, pursuant to Article 4, the President of the Republic has been empowered to enact decree-laws impacting 29 areas of the Parliament’s competence, including the regulation of the judiciary, elections, media and the press. Moreover, decree-laws issued by the President are immune from all judicial oversight in accordance with Article 7.

Finally, Article 22 stipulates the creation of a committee to assist the President of the Republic in drafting amendments related to political reforms.

We note, first, that this Presidential Decree contradicts the provisions of Article 80 of the Constitution, which stipulates that the measures taken by the President of the Republic must be temporary and should solely be implemented in order to confront imminent danger. In practice, the measures that have been announced will be permanent, such as the abolition of the temporary commission overseeing draft laws and ensuring they adhere to the constitution, changes to the electoral law, and the creation of a new committee to draft amendments to the constitution.

The President of the Republic assigned himself the powers of legislative authority, which authorises him to issue decree-laws pertaining to various aspects of society, such as political parties, associations, organisations, constitutional authorities, and the implementation of justice, elections, media, and human rights. Article 7 also made these decree-laws immune to judicial oversight, which constitutes a flagrant violation of the principle of separation of powers. The principle requires that each authority be subject to the supervision of the other, and to Article 102 of the Constitution, which gives the judiciary responsibility to ensure the supremacy of the constitution, oversee all legal texts, and check the extent of compatibility with the constitution.

On the other hand, Article 22 of the Presidential Decree provided for the creation of a committee to draft constitutional amendments and legislative reforms specified by the President of the Republic. This confirms that the President singled out the political decision to institute unilateral reforms in the absence of Parliament and of any will to involve political and social forces and civil society organisations in formulating options that reflect the aspirations of all Tunisian people.

ARTICLE 19 warns against taking advantage of this exceptional circumstance and issuing decree-laws on political parties, associations, organisations and constitutional commissions, and the regulation of justice, elections, media and human rights in a unilateral manner, while Parliament is suspended and without the effective participation and consultation of the civil, social and political forces in the country. This is especially important since the constitutionality of these decree-laws cannot be challenged before the judiciary, which may constitute a deviation in power and a serious impediment to the possibility of any democratic reform in the country.

We also see that maintaining Chapter 2 of the Constitution, which relates to rights and freedoms, does not represent a real guarantee as long as the constitutional mechanisms to protect them have been frozen or suspended, since the President of the Republic can regulate freedoms through decree-laws that are not subject to judicial oversight, and since it is impossible for the Parliament to exercise political control over the executive authority because the functions of the Assembly of the People’s Representatives have been suspended.

Of increasing concern is the targeting of individuals and groups who oppose President Kais Saied’s policies, a situation that has been exacerbated in recent weeks. These people have been defamed and insulted with total impunity, creating an atmosphere of intimidation that could result in individuals refraining from expressing their opinions freely and the absence of pluralism in Tunisian media.[2] Over the last two months, the media has largely avoided delving into political issues or broadcasting unbiased content in favour of the President of the Republic, a trend that will contribute to the decline of public debate and citizens’ participation in public affairs at a very delicate stage for the future of democracy and human rights in Tunisia.

In order to protect the democratic transition process in Tunisia, ARTICLE 19 recommends the following:

To the President of the Republic

To the Independent High Authority for Audio-visual Communication

[2] To read the report of the High Authority for Audio-visual Communication related to political pluralism during the period following the president’s declaration of the state of exception, follow the link :

For press queries or to arrange an interview with one of ARTICLE 19’s experts, please email: [email protected]