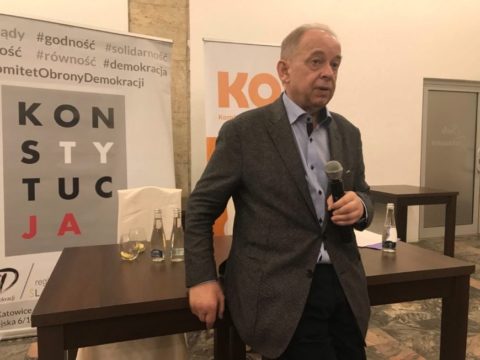 Ahead of proceedings on 24 September 2020, ARTICLE 19 is calling for the Polish public broadcaster, TVP, to drop their criminal defamation lawsuit against constitutional law scholar, Professor Wojciech Sadurski.

The case is one of two civil and criminal defamation cases to be brought against Sadurski by TVP which leading free expression organisations have condemned.

TVP brought the case over a tweet that Sadurski posted on 16 January 2019. In it, Sadurski blamed the Polish public broadcaster TVP for an organised smear campaign that led to the assassination of the Mayor of Gdansk, Pawel Adamowicz, on 14 January 2019. He called on opposition politicians not to appear on the “government media” channels of TVP, describing it as a “Goebbelsian media company”.

In the criminal defamation case under Article 212 of the Criminal Code [in Polish “zniesławienie”], TVP demands a payment of PLN 10 000 [EUR 2500] to a nominated charity. The offence of which W. Sadurski is indicted can attract, in addition to a fine, a penalty of up to 1 year in jail. In determining the penalty, the judge is not bound by the penalty sought by the plaintiff.

In addition to the criminal case, there is a civil defamation case against Sadurski that is being brought by TVP which relates to the same tweet.

Poland’s ruling party, the Law and Justice party, had also brought a SLAPP civil defamation case against Sadurski concerning another tweet. In June 2020, the case was dismissed by the court. ARTICLE 19 have previously issued a joint statement calling for all three cases to be dropped. SLAPP suits – vexatious lawsuits, designed to harass, intimidate and silence those who speak out against the Polish authorities and their affiliates. Such meritless defamation cases pose a significant threat to freedom of expression in Poland. We also have serious concerns about the fairness of the trials, following the recent crackdown on the independent judiciary in the country.

This is not the first time ARTICLE 19 has expressed concern regarding the actions of the public broadcaster, Telewizja Polska SA. In a recent statement we highlighted the biased and imbalanced reporting of the presidential campaign and TVP’s role in amplifying the government’s discriminatory rhetoric against minority groups. We also recently monitored another SLAPP case brought by TVP against journalists of Gazeta Wyborcza, leading Polish daily. TVP has brought a number of SLAPP cases against the media and opinion makers who criticise the broadcaster and its open affiliation with the ruling party. The role of a public broadcaster is to be pluralistic, impartial, well-balanced and independent in its reporting.

ARTICLE 19 believes that a finding against Professor Sadurski in this case would represent a very serious setback for freedom of expression in Poland. It would send a signal to all would-be critics of powerful social actors, such as a public service broadcaster, that any criticism they dare to publish places them at risk of liability. Moreover, criminal defamation law should be abolished without delay.

ARTICLE 19 is monitoring the case and has submitted an amicus brief in the civil defamation case related to the same tweet [in English] [po polsku].