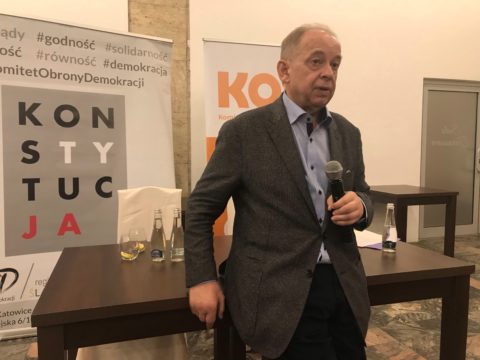 Ahead of proceedings on 15 and 19 June, ARTICLE 19 and the undersigned organisations reiterate the call for the governing party in Poland, the Law and Justice party (PiS), and public broadcaster Telewizja Polska (TVP) to immediately drop their criminal and civil defamation lawsuits against Professor Wojciech Sadurski, a distinguished constitutional law scholar and public intellectual in Poland.

The cases are based on two tweets he sent criticising the ruling party and state broadcaster. These cases constitute SLAPP (Strategic Litigation Against Public Participation) lawsuits as they are brought in bad faith against Sadurski with the aim of clamping down on critical speech by intimidating him, draining his resources (due to the cost and time involved), and reducing his political engagement. The fact that there is a clear power imbalance in the proceedings between the ruling party, public broadcaster and an individual academic is of serious concern. Furthermore, we believe these vexatious lawsuits, by targeting a prominent vocal critic, will have a chilling effect on dissenting voices in Poland.

Prof. Sadurski faces three defamation suits. The first case was brought by the PiS party “for protection of personal rights” [in Polish ”pozew o ochronę dóbr osobistych”] under Articles 23 and 24 par. 1 of the Civil Code. The first hearing took place on 27 November at the District Court in Warsaw; ARTICLE 19 was in Warsaw to monitor the case. The next hearing in the case is scheduled for 15 June 2020, where the verdict is expected to be announced.

Prof. Sadurski also faces a criminal defamation case under Article 212 of the Criminal Code [in Polish “zniesławienie”]. This case was filed by the public broadcaster TVP, as a reaction to a tweet blaming TVP for an organised smear campaign that led to the assassination of the Mayor of Gdansk, Pawel Adamowicz, on 14 January 2019. The first hearing in the criminal case was scheduled for 18 December 2019, but then it was postponed until further notice. Currently, the hearing is scheduled for 19 June 2020. TVP has also brought a civil defamation suit about the same tweet, with the first hearing scheduled for 28 January 2020. It was postponed a day before, a new date is not yet known.

Wojciech Sadurski is a highly respected professor of law at the universities of Sydney and Warsaw who frequently publishes political opinions on his personal blog and Twitter account. He is known as a vocal critic of the PiS, as well as the crackdown on human rights and judicial independence in Poland. Sadurski published a tweet on 10 November 2018 characterizing the PiS as “an organized criminal group”. The tweet called upon citizens to boycott a so-called “Independence March” to be held in Warsaw, which is organised by radical right-wing groups annually. The text read: “If anyone still had any doubts, after the maneuver of the past two days this much should be clear: no honest person should go in a parade of defenders of the White race, who have hidden for a moment their “falangas” [a neo-Nazi symbol] and swastikas, in collusion with an organized criminal group Law and Justice”.

Sadurski then tweeted on 17 January 2019 blaming the Polish public broadcaster TVP for an organised smear campaign that led to the assassination of the Mayor of Gdansk, Pawel Adamowicz, on 14 January 2019. He called on opposition politicians not to appear on the “government media” channels of TVP, describing it as a “Goebbelsian media company”.

As a result, TVP brought a criminal defamation suit and a civil defamation suit against Sadurski. If convicted under the Criminal Code, Prof. Sadurski faces jail time or a fine. In the civil defamation cases, Law and Justice and TVP demand: a public apology in the form of an expensive advertisement in a daily newspaper; an injunction that the defendant refrain in future from any statements which imply that the activities of the Law and Justice party may be in any way compared to any criminal activities; a payment of PLN 20 000 [EUR 4600, US $ 5200] and PLN 10 000  [ EUR 2300, US $ 2600] to nominated charities; and paying all costs associated with the case. Sadurski has reportedly stated that these punishments exceed his financial resources.

The plaintiffs’ civil damages claims, including a demand for PLN 20 000 from a private individual, are clearly excessive and disproportionate. Criminal defamation laws are inconsistent with international human rights law and Article 212 of the Criminal Code should be repealed by the Polish authorities. Given the recent crackdown on the independent judiciary in Poland, there is a risk that both trials will be subject to political influence, control, or bias. Further, the lawsuits were brought, respectively, by a ruling party and a public TV broadcaster, both of which are effectively controlled by state authorities, raising concerns that they represent a thinly-veiled effort to enlist nominally private parties as stand-ins for the government in a campaign to silence and harass a political opponent.

These are vexatious lawsuits, designed to harass, intimidate and silence those who speak out against the Polish authorities. Defamation cases such as these pose a significant threat to freedom of expression and advocacy rights in Poland. Moreover, the hearings are scheduled for the time when Sadurski cannot travel to Poland due to COVID-19 pandemic.

We also have serious concerns about the fairness of the trials, following the recent crackdown on the independent judiciary in Poland.

ARTICLE 19 submitted an intervention in both civil defamation cases highlighting the importance of freedom of expression and political dissent in democratic societies. They can be found here and here.