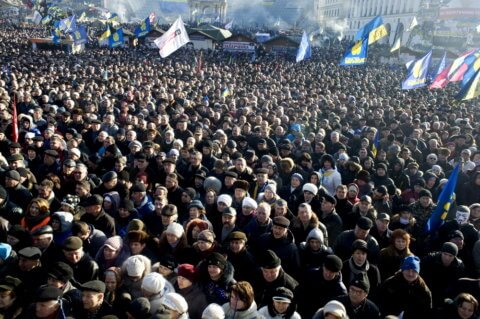 Ukrainian opposition supporters gather at a mass rally on Independent Square in Kyiv on December 29, 2013. Maidan Nezalezhnosti (Independence Square), renamed Euro Maidan by protesters who have camped out there since 21 November 2013, has become the focal point for an enduring protest movement against the government of Viktor Yanukovych. The protests were sparked by the Ukrainian government's decision to suspend preparations for the signing of an association agreement with the European Union that would have increased trade with the EU. Some believe that the U-turn came about as a result of pressure from President Putin of Russia who wants Ukraine to join a customs union with itself, Kazakhstan and Belarus.

In an alarming start to 2014 Ukraine’s parliament has hastily adopted a bill that if passed by President Yanukovich, will drastically restrict the rights to freedom of expression, assembly and association.

The adoption of this restrictive law would be a step back from the progress Ukraine has achieved since its independence more than 20 years ago.

ARTICLE 19 calls on President Yanukovich to veto this Law.

On 16 January Ukraine’s parliament violated its own procedures and hastily adopted Draft Law No. 3879 without debate or discussion, and with only a show of supporting hands, counted within a few seconds.

Law 3879 claims in its title to cover general legal amendments, the judiciary, and the ‘security’ of citizens, but buried inside are draconian restrictions on the fundamental rights to freedom of expression, assembly and association. Under the guise of ‘stabilisation of the country, the protection of the constitutional order and security of citizens’, it severely restricts the ability of people to protest peacefully, limits media freedom and hampers the work of charities.

If President Yanukovich accepts the deeply flawed procedure and signs Law 3879 into force, Ukraine will substantively deteriorate the fundamental rights of its people.

The draconian restrictions include:

Restrictions on the Right to Freedom of Expression

Restrictions on the Right to Freedom of Assembly

Restrictions on the Right to Freedom of Association

Law No. 3879 on ‘Making Amendments to the Law of Ukraine “On the Judiciary and the Status of Judges” and Procedural Laws on Additional Measures for Protecting Security of Citizens’ is in contradiction with Ukraine’s commitments under the European Convention of Human Rights and the International Covenant on Civil and Political Rights. ARTICLE 19 calls on President Yanukovich to veto this bill.