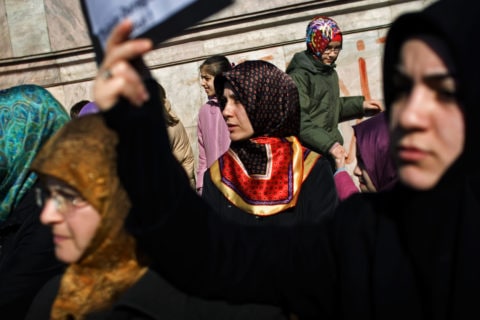 Women protest on the streets of Istanbul against the government ban on headscarves in schools and universities.

ARTICLE 19 condemns the 10 October bomb attack in Ankara in the strongest possible terms, and calls upon the Turkish government to ensure respect for freedom of expression in its aftermath. Since the attack on the rally, there have already been attempts by the government to censor coverage and debate of the event.

“It is now essential that the Turkish government ensure full respect for human rights, including the right to freedom of expression and peaceful assembly. Denying the right to debate and discuss the security and political situation within Turkey is likely to exacerbate tensions within the country,” commented David Diaz-Jogeix, Director of Programmes at ARTICLE 19.

ARTICLE 19 believes that Saturday’s bomb attack – which killed at least 128 people, many of whom were supporters of pro-Kurdish ‘People’s Democratic Party’ – has the potential to deepen social divisions, further undermining opportunity for open political dialogue in the run-up to Turkey’s presidential elections, due to take place on 2 November.

ARTICLE 19 is also concerned by the Turkish government’s attempts to censor coverage of the attacks on both traditional and social media and believes this is part of a wider crackdown on freedom of expression in Turkey.

The Turkish Prime Minister has ordered a temporary broadcast ban on media covering the attacks, banning the dissemination of images that show the moment of the blast, or that ‘create a feeling of panic’. A government spokesperson warned media organisations that they could face ‘a full blackout’ if they do not observe the ban.

“Everyone has the right to access information, particularly on matters of public interest: this includes terrorist attacks and government responses to them. The vaguely-worded ban imposed by the Turkish government, the threat to completely censor media organisations who disobey, and the blocking of social media all clearly constitute unacceptable restrictions on freedom of expression.

“Moving forward, we call upon the Turkish government to ensure a full investigation into the bombings, and prevent similar incidents in the future. Under international human rights law, states are obliged to protect and facilitate the right to freedom of peaceful assembly. This includes ensuring that those responsible for attacks on peaceful protests are brought to justice,” commented Diaz-Jogeix.