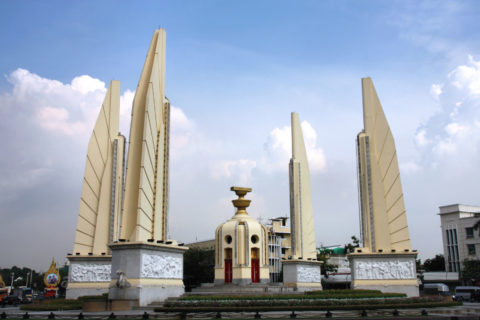 The Thailand government is violating the human rights of Thai citizens in its attempts to suppress an increasingly powerful youth-led protest movement, said ARTICLE 19. At least 22 individuals have been arrested or summoned this month in relation to their participation in recent protests. At least ten activists will report to a police station tomorrow to hear charges connected to their peaceful protest activities. The Thailand government should immediately drop the charges against these individuals and end criminal proceedings against all individuals targeted merely because of their exercise of the right to peaceful assembly.

“Thai officials are trying to undermine a potent protest movement by entangling its leaders and supporters in unjustifiable criminal proceedings,” said Matthew Bugher, ARTICLE 19’s Head of Asia Programme. “The ongoing harassment of activists and student leaders only underscores the protesters’ demands.”

In June, a vigorous protest movement emerged in Thailand, led by student and youth activists, including those associated with the Student Union of Thailand and a new “Free Youth” movement. These activists sought to reinvigorate a burgeoning protest effort that was cut short by COVID-19 lockdown measures earlier in the year. The Free Youth movement drew energy from popular outrage at the 4 June disappearance in Cambodia of exiled activist Wanchalearm Satsaksit.

On 18 July, more than 2,000 protesters attended a pro-democracy rally at Democracy Monument in Bangkok. Student leaders articulated three demands, which have become the core platform for the protest movement: end harassment of activists, dissolve Parliament and adopt a new constitution. In the weeks that followed, further protests were held in Bangkok and around the country, culminating in a gathering of more than 10,000 people at Democracy Monument on 16 August.

The protests have been notably peaceful, and most have concluded without incident. Thai authorities have largely allowed protests to proceed as planned, without physical obstruction or interference. However, the Thai government has launched a campaign of harassment and intimidation against protests organisers and participants, highlighted by a series of arrests.

On 7 August, police arrested prominent human rights lawyer Arnon Nampha and student activist Panupong Jadnok in relation to their participation in the 18 July protest. They were charged with sedition, which carries a penalty of up to seven years’ imprisonment, and various lesser crimes. A week later, Parit Chiwarak, a student activist, was arrested on the same charges.

On 19 August, police arrested Baramee Chairat, advisor to community-based organisation Assembly of the Poor, and pro-democracy activists Suwanna Tanlek and Korakot Sangyenpan, who also participated in the 18 July protest. On the same day, Arnon was rearrested on a separate charge relating to a speech he gave at a Harry Potter-themed protest on 3 August, in which he addressed the role of the monarchy in Thai society. The next morning, four more participants in the 18 July protest, including Rap Against Dictatorship rapper Dechathorn ‘Hockhacker’ Bamrungmuang, were arrested.

On 25 August, police arrested Arnon for the third time in three weeks, and on 26 August, Tattep Runagprapaikitseree, Secretary-General of the Free Youth, and Panumas Singprom, co-founder of Free Youth, were arrested.

All those arrested this month have been released on bail, under the condition that they do not repeat the same offenses. Many have participated in further protests since their release.

More arrests are likely. On 15 August, the Metropolitan Police headquarters claimed they had issued at least 15 arrest warrants and 16 summons against protest participants.

At least ten individuals who were present during the 18 July protest will report to Samran Rat Police station tomorrow, 28 August, after receiving police summons. They face less severe charges than those who have been arrested. The most serious charge against this group is under the Emergency Decree, which was invoked to combat the COVID-19 pandemic and carries a maximum penalty of two years imprisonment.

ARTICLE 19 has previously raised concerns about overly broad measures promulgated under the Emergency Decree, which unjustifiably restrict freedom of expression. These measures have been repeatedly used by Thai authorities to target government critics and peaceful protesters. The ban on public gatherings under the Emergency Decree was lifted on 31 July. Protests are now governed by the Public Assembly Act, a law that is inconsistent with international human rights standards.

The crackdown on activists has proceeded despite official commitments to uphold the rights of protesters. On 13 August, Prime Minister Prayut Chan-o-cha claimed he was committed to listening to the “next generation”, stating on national television, “We have to let them express ideas and become a force to move this country forward.”

The right to freedom of peaceful assembly is protected under Article 44 of the Thai Constitution and Article 21 of the International Covenant on Civil and Political Rights (ICCPR), a treaty which Thailand ratified in 1996.