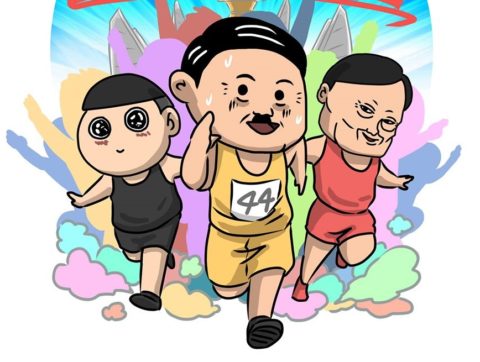 An artwork for Run Against Dictatorship

Thai authorities should immediately halt the harassment of activists organising a running event to protest persistent authoritarianism in Thailand, said Thai Lawyers for Human Rights and ARTICLE 19. The government should take immediate steps to ensure that Thai citizens and other concerned persons are able to exercise their human rights by freely and safely participating in the ‘Run Against Dictatorship’ on 12 January 2020.

“While the government has stopped short of banning the run outright, authorities seem intent on obstructing and harassing the organisers at every turn,” said Yaowalak Anuphan, a human rights lawyer and head of Thai Lawyers for Human Rights. “The government’s campaign of intimidation and obstruction not only violates the human rights of Thai people, but also contravenes the right to freedom of peaceful assembly as guaranteed in the 2017 Constitution.”

Student activists originally planned the Run Against Dictatorship as a protest event in Bangkok aimed at highlighting the anti-democratic nature of the government led by Prime Minister Prayut Chan-o-cha. In Thai language, the run has been dubbed ‘Wing Lai Lung’, which translates literally as ‘run to oust uncle’, a reference to the Prime Minister.

In the past month, an effective social media campaign has generated widespread interest in the Run Against Dictatorship, spawning parallel events throughout Thailand and in several overseas locations. More than 10,000 people have registered to join the Bangkok event. Organisers estimate that runs will be held in at least 30 different provinces on 12 January. Government supporters have organised a competing event in central Bangkok on the same day.

Senior government officials, including the interior affairs minister and a spokesperson from the Prime Minister’s office, have stated that the rival events will be allowed to proceed and that organisers will not be pressured. However, over the past month authorities have routinely impeded preparations for the Run Against Dictatorship and targeted the activists planning runs throughout the country.

Thai Lawyers for Human Rights has provided legal assistance to event organisers and received numerous reports of official harassment and obstruction. In at least fifteen provinces, individuals have faced threats or intimidation because of their affiliation with the run, with several organisers being summoned for questioning in new criminal investigations. Authorities have frequently relied on the Public Assembly Act in restricting Run Against Dictatorship events, and have also referenced other laws including the Land Traffic Act and the Act on the Maintenance of the Cleanliness and Orderliness of the Country.

In Bangkok, authorities forced the cancellation of press conferences concerning the Run Against Dictatorship at the Foreign Correspondents’ Club of Thailand and the Royal Rattanakosin Hotel. The organising team was also forced to change the location of the 12 January run from Ratchadamnoen Road—site of the symbolically important Democracy Monument—to a park further from the city centre after police delayed approval at the favoured location and attempted to impose further restrictions on the event. Thanawat Wongchai, a Chulalongkorn University student and lead organiser of the Bangkok event, has also been summoned by police for participating in a flash mob event organised by the opposition Future Forward Party, raising concerns that he is being arbitrarily targeted because of his role in the Run Against Dictatorship.

Police denied permission to hold the run in Phayao province after summoning the organiser (name withheld) on 6 January 2020. A police superintendent later stated that permission had been denied because the organisers had not fulfilled the application requirements of the Public Assembly Act. In Ubon Ratchathani, a run was approved by police on 6 January 2020, but permission was later withdrawn the same day, with a senior police official citing the potential that the event would disrupt traffic and almsgiving.

In Chonburi province, police suggested that the organiser of a Run Against Dictatorship event, Anurak Jentawanich, change the main objective of the event on paperwork filed under the Public Assembly Act. Police officials further specified that run participants are not allowed to comment on political matters, cover their faces, or display any symbol during the run. Police visited the workplace of the main organiser of the Run Against Dictatorship in Burirum province (name withheld) on two separate occasions. He told TLHR that he decided to call off the event after these visits, which he perceived as clear acts of intimidation.

Thai Lawyers for Human Rights, ARTICLE 19 and other human rights organisations have previously raised concerns about restrictions placed on the rights to freedom of expression and freedom of peaceful assembly in Thailand. During the five years of military rule following the 2014 coup that brought Prime Minister Prayut Chan-o-cha to power, ‘political gatherings’ of five or more persons were prohibited. Although this restriction was lifted following general elections in 2019, authorities have continued to restrict protest rights using the Public Assembly Act and other provisions in Thailand’s legal framework. Thai Lawyers for Human Rights, ARTICLE 19 and other human organisations have regularly highlighted the shortcomings of the Public Assembly Act, and called for reforms to bring it into line with international human rights standards relating to freedom of peaceful assembly and freedom of expression.

“A heavy-handed response to these creative protest activities will only underscore the organisers’ complaints about the current government’s anti-democratic tendencies”, said Matthew Bugher, Head of Asia Programme at ARTICLE 19. “Government officials and police officers should take responsibility for ensuring a free and safe environment for public assemblies rather than erecting roadblocks, real or figurative, in the path of protesters.”

For further reading, see ARTICLE 19’s Principles on the Protection of Human Rights in Protests, available in Thai language.