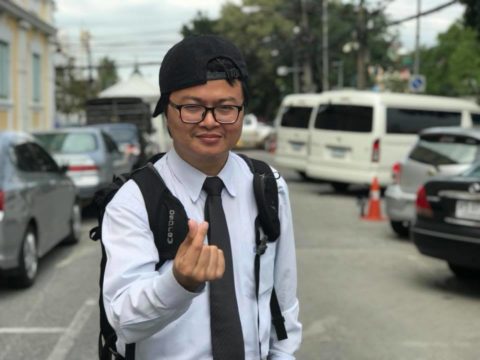 The arrest of prominent human rights lawyer Arnon Nampha and at least one student activist signals a dangerous escalation in the Thai government’s efforts to suppress a growing protest movement, said ARTICLE 19. The two individuals are among a group of activists sought by the police in connection to recent pro-democracy protests. The authorities should immediately and unconditionally release the detainees, end all related criminal proceedings, and cease efforts to harass and obstruct peaceful protesters.

Arnon, a prominent pro-democracy activist and lawyer with Thai Lawyers for Human Rights, was arrested in Bangkok today at approximately 2pm. The arrest warrant presented by police officers was issued by the Bangkok Criminal Court on 6 August and described Arnon’s involvement in recent protest activities. According to the arrest warrant, he is accused of eight violations under multiple laws and emergency measures enacted in response to the COVID-19 pandemic. The most serious charge, sedition, carries a sentence of up to seven years imprisonment. Shortly before his arrest, Arnon announced his intention to give speeches during planned protests on 9 and 10 August.

Panupong Jadnok, a student activist, was also arrested in Bangkok this afternoon. He faces the same charges as Arnon. Panupong and Arnon were identified on their arrest warrants as “Accused #5” and “Accused #7”, respectively, indicating that other protest participants are being sought by the police. At the time of writing, ARTICLE 19 was unable to identify the other accused persons or verify whether further arrests had been made.

Arnon and Panupong have participated in multiple protests in the past month, including a gathering at Bangkok’s Democracy Monument on 18 July that drew more than 2,000 protesters. Earlier this week, the Office of the Prime Minister filed a royal defamation complaint against Arnon in relation to a speech during a Harry Potter-themed protest on 3 August. The arrest warrant is not explicit about which protests are the basis for the charges against the activists, although dates on the document implicate the 18 July protest.

The arrests followed a press conference this morning by the “Free Youth” student activists who have been organising recent protests. The activists reiterated their demands, including the reform of Thailand’s military-backed constitution and the holding of fresh elections. During the press conference, they called for further protests on 16 August if their demands are not met. They also re-branded their movement as “Free People” reflecting their desire to grow the coalition beyond its base of student support.

In recent months, the Thai authorities have repeatedly used criminal investigations and other forms of harassment to suppress the nascent protest movement. The government has used the COVID-19 pandemic as a pretext for obstructing protests, relying on restrictive emergency powers despite the fact that Thailand has not recorded a domestically transmitted case of COVID-19 in more than two months.

“Thailand’s leaders would like to bury those calling for democratic reforms under a mountain of criminal charges,” said Bugher, “The government’s recent actions only underscore the concerns about democracy and human rights that are driving the protest movement.”