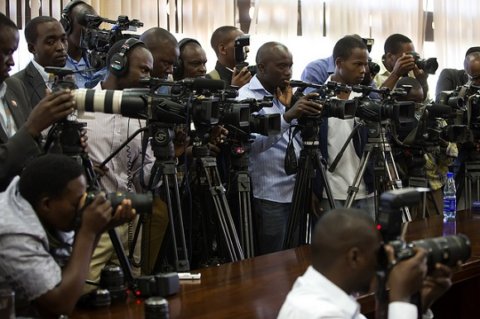 On 24 April 2021, police beat and injured nine journalists in Makumi, Mbeere South, Embu County.  The journalists were covering a story regarding the forceful eviction by police officers of families from a contested land, said to belong to Tana and Athi River Development Authority (TARDA). This was the second time police beat journalists covering stories over the same disputed land. On 13 May 2020, police assaulted and arrested three journalists reporting on a demonstration by residents over the demarcation of the land claimed by TARDA.[1] In the two incidents, the arrested journalists were later released without charge.

These are just two of the many cases of attacks against journalists that have occurred in Kenya since the last World Press Freedom Day on 3 May 2020. ARTICLE 19 East Africa office constantly monitors violence against journalists and media workers in Kenya. Cases in this statement are collected from direct reports filed by journalists and partners to ARTICLE 19 in Kenya. Besides, ARTICLE 19 has interviewed journalists, analysed reports by local, regional and international media, and non-governmental organisations and consulted with relevant media rights groups including unions like Media Council of Kenya, Kenya Union of Journalists, Editors Guild, Kenya Correspondents Association, Association of Media Women in Kenya (AMWIK).

Between May 2020 and April 2021, ARTICLE 19 Eastern Africa recorded at least 51 cases of attacks against individual journalists, including 9 female journalists. Although this is a slight drop from the 59 cases recorded between May 2019 and April 2020, it is still high and unacceptable. Out of the 51 incidents, 25 took place between the last and first quarters of 2020 and 2021 respectively. During the monitoring period, ARTICLE 19 Eastern Africa documented attacks varying from threats, intimidation, harassment both online and offline, physical assaults, invasion of media houses, and in some extreme cases, killings. Police officers lead in these crimes against journalists and media workers.

Based on our research, including interviews with more than 25 journalists in at least 10 counties – some of whom were victims of these attacks – lack of accountability against perpetrators is a running theme in relation to most of the attacks. Victims, and other journalists, decried the challenges stemming from a lack of access to any information on the status of their case. They expressed concern that even after follow-up by victims, authorities provided little or no information regarding investigations. Journalists told ARTICLE 19 Eastern Africa during the interviews in March 2021 that these attacks had forced some of them into self-censorship, or forced exile due to the perception that those attacking journalists enjoy impunity, especially state actors.

Today, on World Press Freedom Day, Article 19 Eastern Africa, highlights just a few of the cases of attacks against journalists that have occurred since the last World Press Freedom Day on 3 May 2020. Authorities must ensure the protection of all journalists, including by carrying out thorough, impartial and credible investigations into all cases of attacks against journalists. This should include providing information on the progress of such cases. If the authorities are indeed carrying out such investigations, providing information will help counter the perception that nothing is being done.

Cases of attacks against journalist between May 2020 and April 2021

On 4 March 2021, supporters of the United Democratic Alliance Party reportedly attacked four journalists, Regina Wangui, Kigotho John Mwangi, Evans Asiba and Elijah Cherutich. The journalists, covering a by-election at the Milimani Primary School, London Ward, Nakuru County, reportedly sustained serious injuries from the attacks. The four journalists reported the matter at the Nakuru central police station.[2] Despite numerous follow up on the case, one of the journalists, who is a victim in this incident told ARTICLE 19 Eastern Africa that there was no evidence of an investigation into the attacks, and that the police had been unable to provide information on the status of the case.

On 4 April 2021, police beat and arrested David Omurunga, a journalist with Milele FM radio at around 8.10pm, while he was walking home from work. Despite him presenting his identification card including official press card, the officers assaulted him and bundled into a waiting police van for violating 8pm to 4am curfew protocols. Journalists are listed as essential service providers and therefore are allowed under ordinary circumstances to operate outside curfew time. According to David Omurunga, the police confiscated his video and voice recorder and both his national identification and press card. He filed a complaint report with the police at Nakuru police station,[3] Omurunga told ARTICLE 19 Eastern Africa that he was yet to receive any report of his case even after making several follow ups at the station. He also yet to receive back his press card and his equipment.

In February 2021, the Governor of Taita Taveta County allegedly verbally attacked Keith Simiyu, a Royal Media Services journalist. The Governor accused him of bias in his reporting. Following this, supporters of the Governor reportedly almost lynched the journalist but security officers who were at the venue prevented the attack. Simiyu told ARTICLE 19 Eastern Africa that the governor publicly incited his supporters, alleging that he had been hired by the governor’s opponents to write negative stories meant to tarnish and taint his name and paint him as a non-performer. Journalists who spoke to ARTICLE 19 Eastern Africa alleged that the governor warned Keith Simuyu that he would face dire consequences if he continued to report on the governance issues in the county.

On 16 July 2020, individuals reportedly sent threats via text messages to journalist, Gordon Okech Okendo. Okendo told ARTICLE 19 Eastern Africa that those sending the messages were well-known to him. The threats were allegedly related to stories he wrote on corruption in Karachuonywo constituency, Homa Bay County. Based on information shared by Okendo with ARTICLE 19 Eastern Africa, he has received sustained threats from the same people since 2014.  Okendo has reported the threats to his life at various police stations including Karen Police Station,[4] Karen Police station[5] and Kendu Bay Police Station.[6]

On 8 September 2020, the Council of Governors (CoG) issued a statement warning media houses regarding their coverage of corruption cases faced by its members. In the statement signed by CoG chairman Wycliffe Oparanya, a copy of which ARTICLE 19 Eastern Africa received, they accused media outlets and journalists of being sensationalists in covering issues touching on governance at the county levels. The Council of Governors took offence with the Daily Nation newspaper headline of that day, which had said “eight governors were under investigation on corruption charges”. The governors said the report was sensational and lacked merit and was part of a smear campaign to taint their performances. The Council of Governors warned media houses with retaliatory measures, which included instructing all County governments to forthwith cease advertising in particularly with Nation Media Group outlets ‘until the situation is rectified’. The Council further threatened to impose similar sanctions against all other media houses who would report them in “bad” light. However, the Ethics and Anti-Corruption Commission in a rejoinder to the statement warned Council of Governors of criminal prosecution if they made good on their threat to block adverts on media outlets, including Nation Media Group over the alleged “unfair coverage, according to media reports[8].”

On 2 December 2020, armed police reportedly raided Anguo FM station based in Voi town, Taita Taveta County. The Media Council of Kenya later condemned the raid, calling it an attempt to intimidate the station and its journalists into silence. The raid followed an interview by the station of a student leader from the Coast Institute of Technology over a students’ strike at the institution.