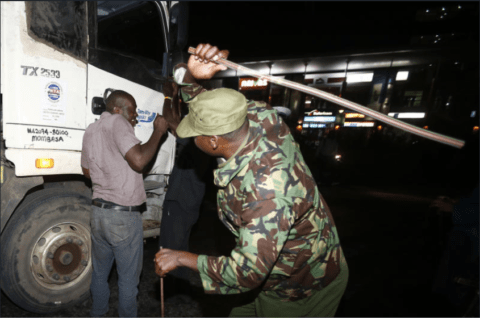 Since the start of the Coronavirus pandemic, there have been at least 48 attacks against Kenyan journalists and restrictions to their work concerning the pandemic.

“It is appalling that in such a grave time brought about by the coronavirus pandemic, the government has not fulfilled its duty to protect journalists and their vital work. Journalists like other essential service providers should be allowed to access and report freely and accurately on the government’s actions to counter the effects and the spread of the coronavirus” said Mugambi Kiai, Regional Director, ARTICLE 19 Eastern Africa.

In a period in which access to information by the people is vital, journalists’ work has faced many challenges. Between 12 March and 31 August, ARTICLE 19 Eastern Africa has documented 48 incidents in which 34 male and 14 female journalists and media workers faced various forms of violations, including physical assault, arrest, telephone or verbal threats, online harassment and lack of access to public information, officials and buildings.

According to ARTICLE 19’s findings, violence against journalists has doubled, compared to the previous six months, between October 2019 and March 2020, when we recorded less than 20 violations.

22 of the 48 recorded cases occurred between 12 March and the end of April, the six weeks after the government of Kenya introduced a raft of emergency measures to curb the spread and effects of the virus. Attacks happened at the county level, with Nairobi (16), Mombasa (7), Turkana (5), Uasin Gishu (3), Nakuru (3), Embu (3) and Kisumu (3) the most affected.

“ARTICLE 19 Eastern Africa is concerned that the government seems to be using the Coronavirus outbreak as an opportunity to further entrench repressive measures. There is a clear increase in surveillance and restrictions on free expression and information”, Mugambi added.

“Such violations against journalists are inconsistent with a free media as espoused in the country’s constitution 2010. Police must expeditiously and thoroughly investigate and the perpetrators prosecuted.”

A majority of media stations have encouraged journalists to accept pay-cuts and many journalists were made redundant. This risks a downward spiral of reduced service to audiences at the height of the global health crisis.

Freelance journalists were also not spared. The collapse of markets for their work due to the coronavirus lockdowns brought misery for them. As freelancers, they have had to contend with the pandemic’s impact without protective gears and protections of unemployment with severed pays. 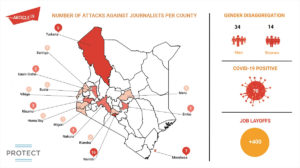 Legal obligations by the State

Freedom of expression and freedom of the media, which includes the freedom to seek, receive or impart information or ideas are guaranteed in the 2010 constitution of Kenya. The constitution only limits the right to freedom of expression with respect to propaganda for war, incitement to violence, and advocating hatred on ethnic or other discriminatory grounds. Important to note is that the constitution also provides that the government should not exercise control over or interfere with any person engaged in broadcasting, the production or circulation of any publication or the dissemination of information by any medium or penalize any person for any opinion or view, or the content of any broadcast, publication or dissemination.

In the past six months, the government has continued to criminalise disinformation, and even misinformation, about the virus. The Public Health Act, Public Order laws on (State Curfew) as well as Computer Misuse and Cyber Crimes Act of 2018 have been disproportionately used to enforce COVID-19 containment measures including by curbing the spread of what is deemed “fake news” by authorities. Provisions of the Cyber Crimes Act have become the tool for government officials to undermine online freedom of expression in the wake of the COVID-19 pandemic.

ARTICLE 19 East Africa office constantly monitors violence against journalists and media workers in Kenya. Cases in this statement are collected from direct reports filed by journalists and partners to ARTICLE 19 in Kenya. Besides, ARTICLE 19 has interviewed journalists, analysed reports by local, regional and international media, and non-governmental organisations and consulted with relevant media rights groups including unions like Media Council of Kenya, Kenya Union of Journalists, Editors Guild, Kenya Correspondents Association, Association of Media Women in Kenya (AMWIK). The cases might not be exhaustive and covered all attacks.

On 17 August, ARTICLE 19 EAF requested information from the Independent Policing Oversight Authority (IPOA) and Inspector General of Police regarding the allegations of both police assault against journalists and the general violations against media professionals. The IPOA responded in a letter dated 1 September that the Authority had received four complaints from journalists against members of the National Police Service and that while they had not made any arrests yet, investigations were underway to bring those suspected to be involved to justice. The Inspector-General of Police has not yet responded or even acknowledged receiving our letter by the time we published this statement.