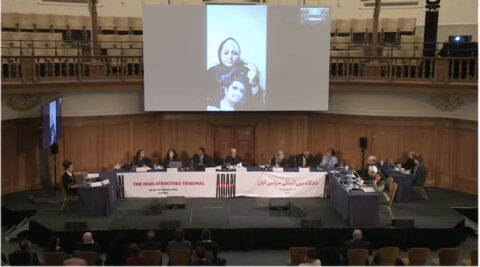 On 18 November in 2019, a harrowing number of protesters and civilian bystanders were killed by Iran’s security forces who, amid the darkness of an Internet shutdown, used unlawful force, including live ammunition, to crush nationwide protests. The days that followed were marked by more tragic deaths, injuries and imprisonment of protesters and bystanders. Two years on, as families of the victims and survivors continue to seek truth and justice in the face of state denials and reprisals, those responsible for these atrocities enjoy absolute immunity and maintain positions of power.

ARTICLE 19 welcomes the Aban Tribunal, an international people’s tribunal, initiated by three human rights organisations, Justice for Iran, Iran Human Rights and Together against the Death Penalty (EPCM), hearingsheld between 10 and 14 November 2021. Over the course of the hearings, a panel of prominent lawyers and judges heard harrowing accounts of killings, torture and imprisonment provided by brave witnesses as well as testimionies of several expert witnesses. The panel is due to deliver its judgment in early 2022.

This powerful initiative to document, investigate and bring forth witnesses to the tragedies is a stark reminder to the UN member states that to this date calls by international human rights organisations for the initiation of an international independent inquiry into the egregious violations of human rights and international crimes committed in November 2019 have remained unanswered. To prevent future bloodshed and to ensure that those who have suffered as a result of the bloody crackdown on November protests have access to justice and effective remedies, all those responsible for unlawful killings, torture and other ill-treatment, enforced disappearances and arbitrary detentions must be held to account.

New precedent for a climate of fear

During the November 2019 protests, thousands of protesters and bystanders were killed, injured and imprisoned. The real numbers of victims of these atrocities is not yet known due a climate of fear instilled by the authorities, which makes evidence-gathering difficult. The week-long Internet shutdown set a precedent for a new arsenal the Iranian state relies on to stifle protests, arrest and kill with impunity. Authorities have shown zero transparency and accountability, evading punishment for the human rights violations inherent in cutting off users from access to the Internet, and have avoided accountability within Iran’s own freedom of information structures.

Countless shutdowns and disruptions of smaller scale protests, including those in Sistan and Baluchistan during February 2021 and Khuzestan during July 2021 have indicated this is the new norm for stifling freedom of expression and the right to protest. The most concerning legacy of the shutdown will be the forthcoming “User Protection Bill”, whereupon authorities are expected to institutionalise and further engrain the nationalisation and separation of the Iranian Internet from international connections. Just as the June 2009 post-election protests engrained years of further centralisation and tightening of restrictions on access to the Internet free from monitoring and censorship, with the ratification of the Computer Crimes Law and the progress on the National Information Network, ARTICLE 19 believes the “User Protection Bill” follows the decades-long trajectory of tightening the net to facilitate crimes such as those of November 2019.

ARTICLE 19 renews its call on the member states of the UN Human Rights Council to respond to the compelling evidence put forward by courageous witnesses and take urgent action to tackle the crisis of impunity in Iran by establishing an independent investigatory and accountability mechanism to collect, consolidate, preserve, and analyse evidence of the most serious crimes under international law committed by the Iranian authorities. This is vital to facilitate fair and independent criminal proceedings. We also urge the international community to call on Iran to fully withdraw the damaging new “User Protection Bill,” which will facilitate the oppression of future protests, and to ensure the availability of free and secure communication and information, which is essential to freedom of expression, privacy, and assembly.

Online harassment against women journalists in the Iranian diaspora