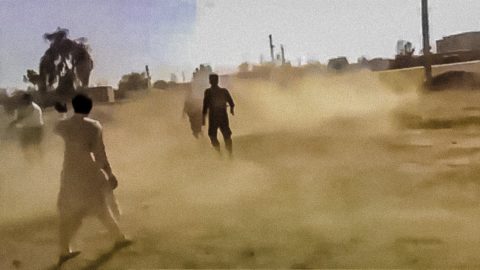 Stills of videos from recent protests broadcast on BBC Persian

We, the undersigned four human rights organisations, are seriously alarmed about continued reports and documented evidence of near total Internet shutdowns in the province of Sistan and Baluchistan, a measure authorities appear to be using as a tool to conceal gross human rights violations and possible international crimes, including extrajudicial killings.

The near total Internet shutdowns began as protests got underway on Tuesday, 23 February 2021 after reports and videos surfaced indicating that the Islamic Republic Revolutionary Guards Corps had opened fire with live ammunition at a group of unarmed civilian fuel porters near the border city of Saravan in Sistan and Baluchistan province, killing at least 10 people including a child. As of Wednesday, 24 February, at 9 pm local time, we have been following reports of the systematic shutdowns of mobile carriers across Sistan and Baluchistan.

The Iranian authorities must immediately stop imposing a near total Internet shutdown in Sistan and Baluchistan and ensure that people can access the Internet freely and securely. They must also end their unlawful use of excessive and lethal force against protesters and ensure that the right of people to peaceful assembly is guaranteed in law and practice.

An Impoverished Province, a History of Shutdowns

Sistan and Baluchistan is known to be one of Iran’s most impoverished provinces. Baluch people, the majority of whom belong to Iran’s Sunni minority, continue to face systematic discrimination in the enjoyment of their civil and political, as well as economic, social, and cultural, rights. The province has weak Internet infrastructure, with few being able to access or rely on home broadband Internet connections. According to Iran’s Communication Regulatory Authority (CRA), in Sistan and Baluchistan, where Internet penetration is around 66.93%, 95.7% of Internet users rely on mobile Internet. These disruptions, therefore, are tantamount to a near total Internet shutdown, and a blatant denial of the right to access information and communication.

During the November 2019 Internet shutdowns in response to nationwide protests, we saw much of Iran lose access to international Internet traffic. However, Iranians remained largely connected to national Internet platforms or services hosted on the National Information Network (NIN). Notably, because of the unrest, Sistan and Baluchistan was one of the last provinces to regain connectivity during the November 2019 shutdowns.

These mobile shutdowns we are currently witnessing in Sistan and Baluchistan are different from previous shutdowns because they block users’ access to the NIN, most likely due to the poor Internet and Communication Technology (ICT) resources and infrastructure in the province.

In recent years, Internet shutdowns have often become commonplace for Iranians exercising the right to protest. These shutdowns in Sistan and Baluchistan constitute a violation of Articles 19 and 21 of the International Covenant of Civil and Political Rights (ICCPR) and it is feared they are being used as a tool to conceal gross human rights violations and international crimes carried out by the state.

Human Rights Council Resolution 44/12 on freedom of opinion and expression (2020) strongly condemns Internet shutdowns and calls on states to refrain from such practices. More specifically, Resolution 44/20 on peaceful protests calls on states to refrain from ordering blanket Internet shutdowns and from blocking websites and platforms during protests or key political moments. Thus, the UN Secretary General’s Roadmap for Digital Cooperation declares, “Blanket Internet shutdowns and generic blocking and filtering of services are considered by United Nations human rights mechanisms to be in violation of international human rights law.”

Iran must enact legislation in line with international human rights law that recognizes the fundamental role that the internet plays in the exercise of human rights and guards against shutdowns. It must acknowledge that restricting access to the Internet is a serious violation of international human rights, in particular freedom of expression and the right to protest within the ICCPR, of which Iran is a signatory. The authorities must ensure those residing in Sistan and Baluchistan can enjoy those rights without any discrimination.

More than a year on from the bloody crackdown on the nationwide protests in November 2019 and the unlawful killing of hundreds of protesters and bystanders, committed in the darkness of an Internet shutdown, lack of accountability and transparency continue to mark Iran’s Internet governance. To this date, there has been no recognition by members of the Iranian government or other state institutions that the 2019 Internet shutdowns were a violation of human rights. Since November 2019, a number of smaller-scale shutdowns and disruptions have taken place with the emergence of protests. Victims’ families, rights activists, and the society as a whole are still awaiting truth, accountability and justice for the gross violations of international human rights law committed by state forces and institutions during and in the aftermath of the November 2019 protests, violations that continue today.