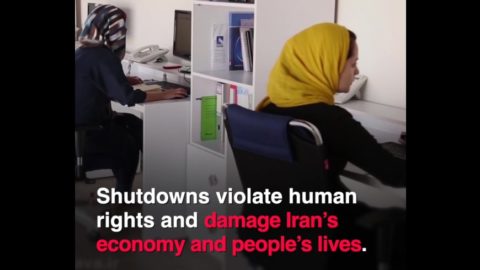 ARTICLE 19 echoes concerns being expressed by people in Iran, who are anxious about the future of access to the global internet in Iran. Since the week-long shutdown in November 2019, Iran’s government has repeatedly disrupted internet access, particularly when protests are taking place on and offline.

On 14 July 2020, the internet was disrupted again during online protests against executions. Two days later on 16 July, it was shut down in the city of Behbahan when people protested against authorities and the failing economy.

People are worrying that only national platforms will remain accessible as the Iranian authorities promote the development of the National Information Network. Members of the Rouhani administration have promised that a strong national internet infrastructure will not mean shutting off from the global internet. However, the national network has diminished the costs of shutdowns for the country, indirectly facilitating them. When the authorities shut down the global internet, crucial national services like local online banking can remain online on the national network.

The authorities have also clarified it is well within the country’s laws to shutdown global connections for “national security,” a catch-all concept to encroach on rights to protests, assemble and associate, all of which are protected within the Iranian constitution, albeit weakly.

Recently, on 28 July 2020, Iranians noticed they could no longer load web pages on their mobile devices. Google’s Accelerated Mobile Pages (AMP), a key service which speeds up people’s access to content online, was cut off.  And because most websites use AMP, people could no longer access many media and business sites, even local Iranian ones.

Foreign websites also use AMP, so many believe that the government was targeting international news services, which are otherwise either blocked or harder to load without AMP in Iran. A similar situation occurred in Egypt in 2018.

ARTICLE 19 agrees with what Iranians inside of the country are saying: shutdowns violate human rights and damage Iran’s economy.

Speculation has grown that the disruption is one of the government’s “filtering strategies” or experiments, to test which parts of the internet it can turn off at will. On 29 July 2020, the Ministry of ICT claimed that the shutdown was one such “filtering test” ordered by the judiciary. More incidents of disruptions have emerged. This includes problems accessing circumvention tools and other platforms such as Microsoft Azure and the software development tool Yarn.

As of this publication, the judiciary has not responded to this claim, and no explanation has been given over why AMP was targeted. This follows similar patterns of a lack of transparency and accountability for actions to limit access taken by the authorities.

“With no clear answers and zero transparency, anxiety is growing over the state of the internet in Iran,” said Saloua Ghazouani, director of ARTICLE19 MENA. “Iran must be held accountable for its actions to limit the Internet for its people, and cease these actions immediately.”

Iran must #LetTheNetWork and #KeepItOn