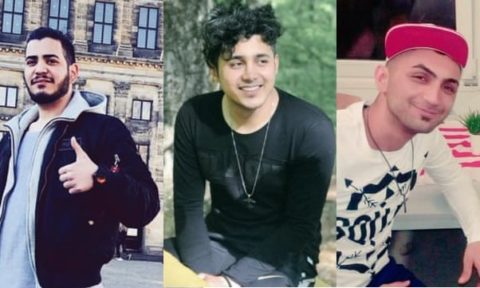 ARTICLE 19 is deeply concerned by confirmation of death sentences for three young men in relation to the November 2019 nationwide protests. The news was followed by what appeared to be attempts to censor online protests that called for these harsh sentences to be overturned. The Iranian authorities must immediately quash their sentences and order fair retrials in line with international laws, which Iran has signed up to. They must also abide by their constitutional and international obligations to allow people to use online platforms to protest.

In an unprecedented move, Iranians across Iran and in the diaspora took to social media on 14 July 2020, tweeting pictures of the three men and the hashtag #Do Not Execute in Persian. Reports and data showed that for  a few hours on Tuesday night, a series of disruptions that slowed connections were experienced across the Iranian network.

“This clear unified call to stop these executions must be heard. The authorities must listen to the will of their own people who are urging them to respect their human rights obligations.

“Instead of subjecting protestors to further violations and censorship, the authorities must prosecute those responsible for the unlawful and deliberate use of lethal force causing deaths and injuries to individuals during the November protests.”

It is not clear that these disruptions were deliberate, however we know that the authorities have deliberately tampered with access to the Internet when faced with protests, including during the November protests. Authorities responsible for the governance and administration of Iran’s telecommunications infrastructures have time and again failed to transparently explain why unexplained disruptions occur across the Iranian network. The harrowing precedent of the six-day long national internet shutdown of November 2019 casts a long shadow on digital rights and the subsequent rights to freedom of expression in Iran.

Further censorship includes the take down of Etemad newspaper’s reporting on the viral spread of the hashtag shortly after publication. Iran’s state media, the Islamic Republic of Iran Broadcaster (IRIB) has remained silent on this overwhelming online protest, further highlighting the state’s attempts to control the narrative around protest of the state’s decisions.

Amir-Hossein Moradi (25), Saeed Tamjidi (27) and Mohammad Rajabi (25), were arrested in November and December 2019. In February 2020, a Revolutionary Court in Tehran convicted all three of several charges including the charge of Moharebeh (enmity against God) and sentenced them to death.

According to a statement by the Judiciary’s spokesperson, the men allegedly committed acts of arson and vandalism. These alleged crimes are reportedly considered to amount to the crime of Moharebeh, which could be punishable by death. This is in flagrant violation of international human rights law, which states that the death penalty may only be imposed in very restricted circumstances and for the “most serious crimes”, defined only as intentional killing.

The court apparently also sentenced all three men on the charge of armed robbery for a separate incident.

The proceedings in the cases of Moradi, Tamjidi and Rajabi have been marred by serious violations of due process and fair trial guarantees. All three men were subjected to enforced disappearances following their arrest and were denied the right to access a lawyer during their interrogations. They have all said that the authorities subjected them to torture, including by beating and kicking them. The authorities also broadcast Amir-Hossein Moradi’s forced “confessions” on the Islamic Republic’s Broadcasting in violation of his right to the presumption of innocence and to not to be subjected to torture and other ill-treatment. According to a lawyer representing Moradi, the defendants withdrew their “confessions” at trial.