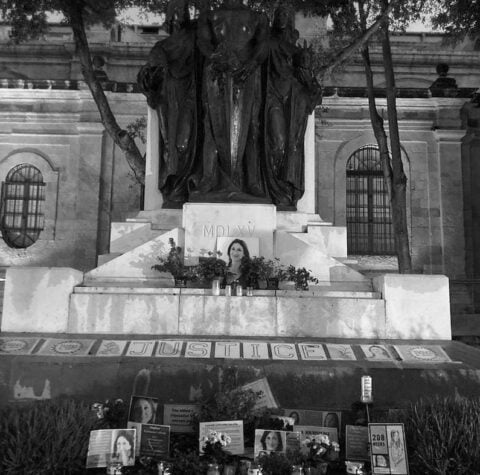 Memorial for journalist Daphne Caruana Galizia, who was murdered in Malta in 2017

On 2 November, ARTICLE 19, journalists and free expression advocates around the world mark the International Day to End Impunity for Crimes against Journalists.

This year countries around the world are called on to investigate not just crimes against journalists, but also all threats against them. It is vital that states ensure that all lines of enquiry linking journalistic activity and threats, violence and attacks are exhausted during investigations.

Journalists’ safety is a key focus of ARTICLE 19’s work. If journalists are not protected and able to do their work safely, everyone’s right to freedom of speech and the right to know is under attack. As world leaders gather in Glasgow for the climate change summit COP26, we also acknowledge the very real risk environmental activists — and journalists and civil society that report on and share their work — face.

“There have been great strides in the teaching of media literacy, and in the calls for protection of journalists,” writes ARTICLE 19 Executive Director Quinn McKew in the introduction to The Global Expression Report 2021. “But impunity is still a huge issue, with high-profile murders and silencing of dissenting voices still firmly in the playbooks of power-holders. It is up to us to continue to work together to call this out, wherever it happens.”

Established by the United Nations, the International Day to End Impunity for Crimes against Journalists’ (IDEI) and its supporting resolution urges member states to take concrete measures to address the endemic culture of impunity. The date was chosen to commemorate the assassination of two French journalists in Mali on 2 November 2013.

Silvia Chocarro, Head of Protection at ARTICLE 19, will be speaking about online harassment and abuse  to silence journalists, in particular women, as part of the United Nation’s High Level Panel for the IDEI, which this year will look specifically at impunity, disinformation and hate speech.

We also look at the decades-long trend of governments, politicians, powerful businesses and other individuals and groups trying to silence journalists.

In Vietnam, independent journalist Pham Doan Trang has been repeatedly targeted for daring to report on a range of sensitive topics, from environmental rights to police violence, as well as for her advocacy for press freedom. She was arrested in October 2020, but even before then she had faced harassment and intimidation for several years, and is now disabled after being brutally assaulted by police in 2015 and 2018. Her case has been raised by UN Human Rights Council Special Rapporteurs and ARTICLE 19 alongside 27 other human rights organisations who recently appealed to the authorities to release her and drop the charges against her. On 29 October, the UN Office of the High Commissioner for Human Rights reiterated its calls for her release and stated that her continued detention was “arbitrary deprivation of liberty under international human rights law.” Pham Doan Trang was due in court on 4 November, but the trial has now been delayed.

ARTICLE 19 also highlights the situation for journalists in Hong Kong, where some of the most shocking declines in freedom of expression have taken place over the last year and where journalists have been arrested, censored and attacked for reporting on democracy campaigns. ARTICLE 19’s Michael Caster looks specifically at the decline in internet freedom and its impact on journalists and their freedom of expression.

In Guatemala, journalist Marvin del Cid has come under attack for reporting on corruption and government officials — demanding his right to access to information for the public good. For that he has been threatened, followed, and harassed. Colombian journalist Jineth Bedoya was kidnapped, raped and tortured by paramilitaries after her investigations into an illegal weapons ring.

Across Africa, governments use repressive laws to stifle citizens’ right to access to information and journalists’ freedom of expression. Violence against journalists continues, and this year has seen the killings of Somali journalist Jamal Farah Adan and Joël Mumbere Musavuli, a broadcaster in the Democratic Republic of Congo, among others.

Although there have been some improvements and reforms to improve conditions for journalists, such as defamation no longer being punishable by prison sentences in Niger, many laws are still in place across the continent that jeopardise journalists’ freedom of expression.

But why do these assaults continue and why are so few people being held to account? In 2017, Maltese journalist Daphne Caruana Galizia was murdered by a car bomb. Four years on, there have been no convictions. Caruana Galizia uncovered links between top-ranking officials, the alleged diversion of  taxpayers’ money to offshore companies and corrupt deals linked to the Azerbaijan state oil company SOCAR. The scandal, and the crime that took Caruana Galizia’s life, eventually led to a huge shake-up in Malta’s political landscape. With a new president in place, and with international pressure continuing, Malta now has the opportunity to set an example for the rest of Europe and end impunity for these crimes and protect media freedom.

In Bangladesh, why, after almost 10 years, have the brutal murders of Sagar Sarwar, news editor of private TV channel Maasranga, and his wife Meherun Runi, a senior reporter at ATN Bangla television on February 11, 2012, still not been solved? Only recently have concrete steps been taken to bring justice in their case, with the findings of an investigation due for release later in November.

Mexican journalist Lydia Cacho has risked her life to get the truth out — and to fight against impunity for the man who tortured her, businessman Kamel Nacif.

The case has been ongoing for more than 16 years, and began with Cacho’s investigations into trafficking and sexual abuse of minors by some of Mexico’s most powerful men, published in her 2005 book The Demons of Eden: The power of child pornography in Mexico.

In July, a court ruled that Nacif would not be held responsible for crimes against Cacho, so for Cacho, for ARTICLE 19 in Mexico and Central America, and for free speech advocates around the world, the fight against impunity continues.

ARTICLE 19 and partner organisations call for governments and the media industry — and social media companies are vital here — to implement measures to protect women journalists. Threats against these journalists must be addressed immediately, and the perpetrators must face justice.

In so many of these cases, it is the shocking impunity that stands out. The time that has passed since these crimes have been committed is alarming, and for most, justice remains out of reach. Speaking about the case of Daphne Caruana Galizia, ARTICLE 19’s Head of Europe and Central Asia Sarah Clarke notes: “The battle for justice for Daphne has gone on for too long.” This could be said for many cases around the world. As Clarke says, “It’s time for Malta – and the rest of the world – to step up to protect our journalists who do so much to protect the rest of us.”

PLUS
OSCE: Safety of Women Journalists

Also from ARTICLE 19 on the International Day to End Impunity for Crimes against Journalists:

Faruq Faisel, Director for the  Bangladesh and South Asia office on the murders of Sagar Sarwar, news editor of private TV channel Maasranga and his wife Meherun Runi, a senior reporter at ATN Bangla television on February 11, 2012 [in Bangla]

In October, ARTICLE 19, the Committee to Protect Journalists, the European Centre for Press and Media Freedom, the European Federation of Journalists, and Reporters Without Borders (RSF) travelled to Malta to meet with President Robert Abela and demand full criminal justice for Daphne Caruana Galizia’s assassination