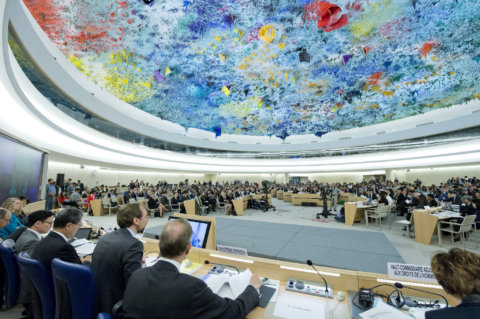 Today, 26 February, the UN Human Rights Council begins its 37th Session (HRC37) in Geneva – over the next four weeks the UN’s top human rights body is expected to act on some of the world’s most pressing freedom of expression violations and abuses.

The agenda is tightly packed: this Session kicks off with the UN Secretary General and high level representatives of the world’s governments setting out their visions for human rights in 2017.

The HRC has a new membership going into the March session, including some of the world’s worst violators of the right to freedom of expression. It is therefore essential that other countries step up.

ARTICLE 19 will be present throughout the Session to advocate for progressive free expression standards, and action on serious violations of this right, to hold States to account where they are failing to live up to their obligations and commitments.

Our priorities for HRC37 are:

ARTICLE 19 also will engage for the first time with the UN Committee on Economic, Social and Cultural Rights, to address attacks on journalists and restrictions on access to information in Mexico.

It is essential that the Council delivers on its mandate to bring about meaningful change to human rights situations at the national level. While some countries regularly appear on the HRC’s agenda, politics often means silence on other serious human rights violations. ARTICLE 19 will be advocating to put Turkey on the agenda of HRC37, and push for strong responses to crises in Myanmar, Iran, Eritrea, and South Sudan.

Turkey has continued a downward spiral on freedom of expression under a state of emergency has remained in effect since an attempted coup in July 2016.

Even though more than 90 countries sponsored a September 2016 HRC resolution calling on States to release arbitrarily detained journalists, depressingly few States have reacted to developments in Turkey by condemning the country’s rise to being the world’s largest jailor of journalists.

The life sentences handed down to three journalists on 16 February, in defiance of a ruling of Turkey’s Constitutional Court, must trigger a response from States that claim to care about freedom of expression and media freedom. Ahmet Altan, Mehmet Altan and Nazli Ilicak must be released, along with more than 110 other journalists currently behind bars.

A reaction from the HRC would send a clear signal to the government of Turkey. It would come ahead of the UN Special Rapporteur on freedom of expression’s presentation of his country visit report to the HRC in June 2018, and alongside recent allegations from the mandate that must be answered.

Turkey will be a focus of a number of ARTICLE 19 interventions at HRC37, and feature prominently in our event on abuses of “states of emergency” on 2 March.

The human rights crisis in Myanmar is high on the HRC’s agenda, with both the UN Special Rapporteur on the country situation, and the Independent International Fact Finding Mission to address States on 12 March.

We’ve set out our concerns on the increasingly alarming situation for freedom of expression in the country in a new briefing, including the criminalisation of online dissent, restrictions on reporting in conflict-affected areas, the targeting of journalists through attacks and criminal charges, stalled legal reforms, violations of the right to protest, and failures by the government to address or condemn the growing problem of “hate speech” targeting religious and ethnic groups.

It is clear that the NLD-led government has not made progress on any of the calls for action to protect freedom of expression in HRC Resolution 34/22, adopted in March 2017. Violations of this right, within and outside of conflict-affected areas, as well as online, will only perpetuate ongoing conflict and insecurity in the country.

ARTICLE 19 will be advocating for the EU-led resolution on Myanmar to more comprehensively address the freedom of expression situation in the country, and be calling on all States to support the renewal of the Special Rapporteur mandate.

We will also be discussing the work of civil society to counter “hate speech” in Myanmar at our event on 6 March.

Crackdown on dissent in Iran

As we mourn the passing of Special Rapporteur Asma Jahangir, we will be calling for States to raise freedom of expression concerns in Iran at HRC37, as the search for her successor begins.

Our latest briefing demonstrates that it is more important than ever to increase support for the resolution at HRC37 renewing the Special Rapporteur mandate on Iran.

Recent attacks on and killings of protesters, Internet shutdowns, repression of environment and women human rights defenders, threats to media freedom, and targeting of religious minorities, all underscore why HRC member states must vote in favour of this resolution to ensure continued monitoring and accountability for these violations.

We are urging HRC Member States that have previously voted “no” or “abstain” on Iran resolutions at the UN to throw their full support behind the resolution.

Action on Eritrea and South Sudan

The dire situation for human rights, including freedom of expression, in Eritrea and South Sudan will be discussed during interactive dialogues with special procedures on the human rights situation in both countries. We’ll be engaging in both debates to push for the protection of journalists and highlight continuing restrictions on media freedom, which the Council must take action to address.

We’ll be responding to the UPR outcomes for Pakistan and Ukraine. States’ full engagement with these once-every-five-year reviews is an important way to ensure commitments to freedom of expression at the UN translate to agendas at the national level and bring about change.

A number of thematic special procedures will present annual reports relevant to freedom of expression at HRC37, including the Special Rapporteur on freedom of religion or belief, and the Special Rapporteur on privacy. On several issues, corresponding thematic resolutions will be negotiated and adopted, demonstrating the international community’s priorities for legal and policy action, while reflecting (and often shaping) how States understand their international obligations.

Civil society space and action are essential to tackle the growing and global problem of hatred based on religion or belief. Shrinking civic space not only restricts the voices of minority groups and those subject to hateful rhetoric, but importantly it limits the freedom of all people to speak out to counter this “hate speech”, discrimination and violence.

We’ll be discussing how to tackle intolerance while protecting the freedoms of expression and religion or belief at a side event on to the HRC on 6 March, alongside Canada and other cosponsoring States.

We’re calling on States to lead by example in implementing their international commitments in this area, and to reinvigorate UN processes to promote inclusion, diversity and pluralism.[1]

Renewing consensus support for HRC Resolution 16/18, the landmark 2011 agreement by states to combat intolerance on the basis of religion or belief, is essential. While the action plan contained in the resolution is more relevant than ever, international cooperation appears to have stalled, with no intergovernmental meeting as part of the Istanbul Process since July 2016. Reporting on implementation of the resolution to OHCHR also remains low. Renewed momentum is needed to put this agenda back on track, and now more than ever governments have to take seriously the need to act to combat intolerance.

The EU will lead its annual resolution on freedom of religion or belief, containing key commitments for States to protect this right, and the Special Rapporteur will present his latest report to the HRC.

“States of emergency” are the focus of the annual report of Fionnuala Ní Aoláin, the Special Rapporteur on the promotion and protection of human rights while countering terrorism, to be presented at HRC37. States of emergency have in too many countries become the norm rather than the exception, and allow for a worrying and disproportionate disregard for core human rights in the supposed pursuit of national security – with disastrous consequences for freedom of expression and civic space. We’ll be joining with partners and the Civic Space Initiative to discuss the human rights challenges posed by these situations in Turkey, Ethiopia and France at a side event with the Special Rapporteur on 2 March.

A series of Egypt-led resolutions on “the effects of terrorism on human rights” have been a challenge at the HRC in recent years, undermining the principle that the protection of human rights is the only way to ensure national security. ARTICLE 19 has opposed this initiative from the beginning, as it endangers international standards on freedom of expression, and only seeks to distract from scrutiny of Egypt’s own terrible human rights record. Whether this initiative will return at HRC37 remains to be seen.

States have made normative advances at the UN on the right to privacy since they took up this issue in response to the Snowden revelations almost five years ago; a recent OHCHR expert workshop is expected to lead to a substantive follow-up resolution on this topic at the UN General Assembly’s Third Committee later this year. We will be engaging States on how to move this agenda forward.

Other issues to watch out for…

At the conclusion of HRC37, a new Special Rapporteur on the right to freedom of peaceful assembly and association will also be appointed. We will look to work with the new mandate holder, in particular to protect the right to protest.

The UN Committee on Economic, Social and Cultural rights will conduct its periodic review of Mexico in Geneva, while the HRC is also in session on 12 – 13 March.

ARTICLE 19’s Mexico team has made a parallel submission to the Committee, focusing on how impunity for the epidemic of violent attacks on journalists, and failures to secure the right of access to information, particularly for marginalised communities across the country, violates the government’s obligations under the International Convention on Economic, Social and Cultural Rights. Action on the Committee’s concluding observations will be essential.

Our scrutiny on Mexico will continue at future sessions of the HRC, following the recent visit of the Special Rapporteur on freedom of expression to the country, and the upcoming Universal Periodic Review.

Follow @article19un for live updates and watch online, use #HRC37 to join the discussion, and check out our UN work as the Session progresses.

[1] We’ll also be launching a guide to help civil society and states understand the international standards and best practices in this area.