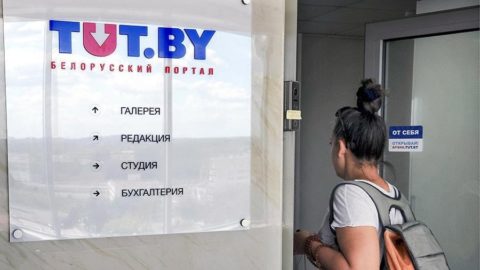 ARTICLE 19 is appalled by the latest crackdown on TUT.BY, one of the most popular internet news outlets in Belarus. On 18 May 2021, access to the website was blocked, including via VPN. Law enforcement agents searched TUT.BY’s offices of the outlet and a criminal case has been opened against it for “tax evasion”. Additionally, a number of people related to the outlet have been detained.

Launched in 2000, TUT.BY is considered the main independent online news outlet in the country. It is an important source of information for Belarusians looking for objective information about the situation in the country. Since August 2020,TUT.BY has reported on demonstrations and the ongoing crackdown on protesters, activists, journalists and human rights defenders. One of TUT.BY’s journalists, Katsiaryna Barysevich, was sentenced to six months in prison for investigating the death of a protester Raman Bandarenka.

TUT.BY is not the only online resource blocked in the aftermath of the August 2020 presidential election; dozens of others have been censored, including Euroradio, Belsat, and most recently – Probono.by. For this reason many people switch to following independent information on Telegram and other social media, but the authorities target such channels and their administrators too.

“Online space in Belarus is shrinking dramatically,” said Sarah Clarke, Head of Europe and Central Asia. “In addition to blocking Internet resources, we have seen repeated Internet shutdowns and disruptions whenever the people of Belarus took to the streets. There are currently 16 journalists behind bars, many bloggers, and hundreds of activists and protesters. The international community must act, they cannot go back to ‘business as usual’ with the regime – more sanctions are needed.”

According to the Belarusian Association of Journalists, the General Prosecutor’s Office found the TUT.BY website had violated  the Law on Mass Media on numerous counts, chiefly in relation to the publishing and sharing of banned information in a number of publications. These materials contained information about the unregistered BYSOL foundation, which collects funds to support victims of human rights violations and persecution since August 2020.

ARTICLE 19 condemns the ongoing crackdown on freedom of expression in Belarus and stands in solidarity with persecuted media workers. We call on the international community to strengthen the sanctions against the regime and to support media and civil society in the country as they operate in a increasingly hostile and dangerous environment.