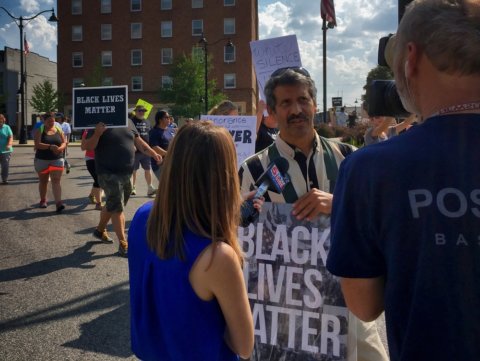 On World Press Freedom Day, ARTICLE 19 has published a series of reports that show how journalists around the world are facing an increasingly hostile environment to work in – whether verbal abuse, violent attacks or punishment under repressive laws.

We have observed this trend in democracies as well as authoritarian states, and believe that the hostility that journalists face is affecting their ability to hold the powerful to account.

Read our Executive Director Thomas Hughes’ blog on the threats to journalists around the world this World Press Freedom Day.

United States: Trump contributing to a hostile environment for the press

An unprecedented press freedom mission has found that media freedom is under attack in the US. Journalists’ ability to report on matters of public interest is being undermined by attacks, arrests, prosecutions, border stops and the searching of devices. The report also found that President Trump’s verbal attacks on the media have worsened an already hostile climate to the press. However, the report notes that threats to the media pre-date Trump. For example, the Obama administration, brought record number of whistleblower prosecutions.

The Myanmar Government continues to violate media freedom, using repressive laws to silence journalists.   ARTICLE 19 is calling on the Government of Myanmar to reform the repressive legislative framework, which is an essential development if there is to be a genuine move towards media freedom.

Journalists who covered the 2017 General Election worked in an exceptionally challenging environment. ARTICLE 19 recorded spikes in attacks and the arrests of journalists during the Kenyan general elections in August and October 2017 and the subsequent court petitions in 2018. Many of these crimes have not been investigated, even when the perpetrator is known to the authorities.

In Bangladesh, 20 journalists have been killed in the last five years. 2017 saw the continuation of violent attacks against those working for the media. There were also ten abductions as well as intimidation and threats against the family members of journalists. The deterioration in press freedom in 2017 is expected to continue, given that elections are expected to take place in late 2018.