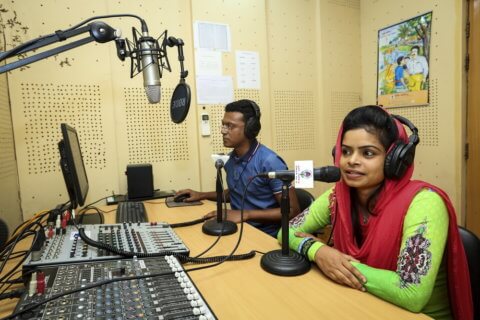 In 2017, there were 335 violations of the right to freedom of expression in Bangladesh: this is the highest number since 2013. Almost 70% of violations were against journalists working at grassroots level.

Over the last five years, criminalisation of expression and the use of laws to restrict expression have been a rising trend, and physical violence has been less and less employed to silence journalists and communicators.

In 2017, Bangladesh saw over 655,000 Rohingya people cross the border from Northern Rakhine State fleeing a campaign of ethnic and religious persecution by Myanmar’s security forces. Against the backdrop of this humanitarian and political crisis, Bangladesh became eligible for a change in status from ‘least developed’ to ‘developing country’.

Despite economic success, throughout the year human rights groups raised serious concerns over human rights violations including enforced disappearances, abductions, serious bodily harm and silencing of dissent. Forthcoming elections were much discussed, with concerns around the participation of all political parties.

Cause for particular concerns were the continued existence of restrictive laws, together with legislative proposals, and ongoing impunity for attacks on freedom of expression.

This is compounded by a near-200% increase in physical attacks (103 including grievous and minor assaults) since 2016, when we recorded only 54 incidents. Journalists were often targeted because of exposing corruption and the misappropriation of public funds, for expressing unpopular or oppositional opinions, and while covering protests.

2017, there were 28 cases of serious bodily injury, 75 cases of minor assault, and 10 cases of abduction. In the 10 cases recorded, journalists were released after promising to refrain from publishing certain reports. In 2017 there was only one murder case: that of Abul Harkim Shimul.

In terms of legal harassment, we recorded 65 cases of criminal defamation, 76 applications of Section 57 – comprising 22.7% of the overall total number of violations this year, up significantly from 6.9% in 2016.

93% of violations were carried out by non-state actors – almost 49% were carried out by leaders and political corps including student activists of the ruling party. In particular we have also found that a substantial number of perpetrators were from other categories which involved private individuals and private corporations and their employees.

In the face of all these violations against the right to freedom of expression, impunity reigns and a pattern of apathy in the justice system continues. In 2017 we found that in 42 cases journalists have taken no legal steps and 126 cases where they have taken, of those only in 6 of them preliminary investigations have been completed. In the remaining 169 cases, the only option available to journalists was to pursue a legal defence against accusations made i.e. defending themselves against charges in court.

Only one of the 20 cases of killing of journalists and bloggers in the last five years has been concluded, with delays reaching alarming levels in the cases of Sagor Sarwar, Mehrun Runi, Abhijit Roy, Faisal Arefeen Dipon, Xulhas Mannan, and others.

Existing legislation such as criminal defamation legislation and Section 57 of the ICT Act 2006 continue to impose impermissibly broad limits on freedom of expression online and offline, and new legislative proposals such as the proposed Digital Security Act, 2016, threaten further restrictions out of step with international standards.

This report examines violations in 2017, and contains recommendations to the Government of Bangladesh and other actors to take urgent steps to protect free expression.