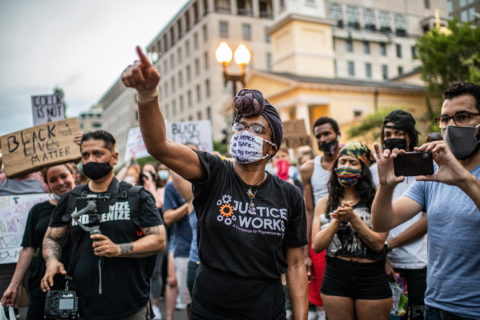 ARTICLE 19 stands in solidarity with protestors in the US who are demanding justice for police brutality and an end to institutional racism. We call on the relevant US authorities to take action to end the use of excessive force against protestors and journalists, and hold those responsible to account.

Freedom of expression is at its core about ensuring the right of individuals to speak out against oppression, government abuse and discrimination, and express and share their ideas and perspectives to improve our individual lives, communities and societies. The right to protest and speak out against racism and abuses by authorities is central to the right to free expression.

The response of many US authorities to people’s exercise of their constitutional and human rights has been deeply disturbing and discriminatory. They represent abuses against basic human rights, and those responsible for inciting and implementing violence against protestors must be held accountable.

We urge the US Congress to open an investigation into the abuses of power witnessed during these protests, including the violent assault on peaceful protestors in Lafayette Square by federal police forces. We further call on the US President to stop inciting division through his messages on Twitter and at his press conferences. We ask him to stop demonising protestors and journalists, and instead to speak out against racism and intolerance in US society.

It is time for the government to listen to and engage with the demands of protestors. While some authorities have begun to take action, they must maintain momentum for concrete solutions to address and eradicate racism and police brutality in the US.

Since protests began in response to the killing of George Floyd, police and government responses have shown an alarming disregard for the rights to freedom of expression, equality and press freedom.

Journalists and other media workers covering the protests have been arrested and assaulted by law enforcement, exposing a total failure by authorities to recognise the rights of journalists to report freely on events of public interest, and the importance of this right in safeguarding press freedom and the public’s right to information. The US Press Freedom Tracker has recorded nearly 300 violations of the rights of journalists covering protests, many violent, while the Governments of Australia and Germany have expressed concern at the treatment of their countries’ reporters at the hands of police. Journalists have reported being punched, kicked, and pepper sprayed, with two having lost eyes after being hit with rubber bullets, often in attacks that appear to deliberately target journalists. Journalists must be able to conduct their work during protests and civil unrest. They must be allowed to remain in the vicinity of protests even during dispersal orders, their equipment must not be seized or damaged, and they must not be targeted with arrest or violence for doing their jobs. These continued abuses against journalists create a chilling effect on reporting on protests, which is essential to an informed public, and this in turn risks creating a vacuum for misinformation to spread unchecked.

These latest abuses are however not an anomaly in the US, they follow years of denigration and demonising of independent media by US President Donald Trump, and an increase in arrests of freelance and citizen journalists, as well as unjustified detentions, device searches and denial of entry to journalists at US borders. This trend is not only in violation of the US’s international human rights obligations, but also its Constitution, which provides strong safeguards for press freedom under the First Amendment.

Like attacks against journalists, the police response to protestors is not detached from a context of years of police brutality being met with impunity and encouraged by past statements made by President Trump. Racism has been allowed to go unchecked in US police forces and society for too long. Previous abuses by police have been well documented, such as beating and pepper spraying protestors, plowing vehicles into crowds, and violently arresting peaceful demonstrators. The militarisation of US police forces has also enabled an increasing reliance on the use of “less lethal”, but nonetheless harmful, weapons such as rubber bullets and tear gas in response to protests, in a way that violates international human rights standards, which call for the use of such weapons to be strictly limited.

The well documented use of extreme and excessive force against protestors, particularly black protestors, is also part of an erosion of constitutional and human rights to free expression, and the right to be free from discrimination, in the US. Many police forces have displayed an utter disregard for their responsibility to enable the right to protest, destabilising a fundamental building block of democracy, and putting protestors safety at risk.

The First Amendment of the US Constitution guarantees the right to freedom of assembly. Additionally, under international human rights laws by which the US is bound, governments must protect and enable the right to protest, without discrimination, and any restriction of this right must be provided for by law, required to meet a legitimate aim such as to protect the right to life, health or public order, and must be necessary to achieve this aim, and proportionate. The widespread use of force against protestors by police in the US has consistently failed to meet the requirements of necessity and proportionality, as shown most blatantly by the use of tear gas against peaceful demonstrators outside the White House. Documentation of unprovoked violent attacks with batons, shields, and teargas against demonstrators, as well as the arrests of protestors for engaging in peaceful acts, demonstrate a clearly disproportionate response and a disregard for police responsibilities in protest. Even where violence is seen in protests, police response must be proportionate, and must not be applied in a blanket way against all protestors.

International laws are clear that human rights must be protected for all equally, including the right to assembly. Police forces must not only ensure they enable the rights of protesters and end their use of force, but must address institutional racism, which fuels the discriminatory violations seen across the country, and is a central part of protesters demands.

Lack of transparency in policing

During the protests, several reports have documented the police covering their badges and identification, in violation of their own departmental policies, and many of the federal forces in Washington DC refused to identify themselves. These actions have made it extremely difficult to identify officers that have engaged in acts of violence against journalists and protestors. In fact, it can be impossible to even know what department or level of government they represent. In the US, there is a systemic lack of transparency in policing. Records of police misconduct, including allegations, hearings, and any disciplinary actions are often shielded from the public. This suppression of information is part of the infrastructure that enables the very policy brutality that is currently being protested.

As representatives of the State, police must observe legality, necessity, proportionality, and accountability in all actions that impact human rights, according to international standards. The public’s right to know who is policing the protests is essential to ensuring that officers are held accountable for their actions.

Use of surveillance technologies during protests

The police use of surveillance against journalists and protestors is further cause for concern. The militarisation and expansive funding of US police departments have facilitated their acquisition of a staggering array of surveillance tools, the use of which has been documented during the ongoing protests. Local police have deployed drones and mobile surveillance towers to enable persistent audio and visual surveillance. Several federal agencies have been caught operating cell-site simulators, which mimic cell towers to collect call, text, and browsing data from mobile phones. The use of facial recognition has also been reported; these technologies are well-known to disproportionately misidentify non-white faces and compound the discriminatory nature of rights violations against protestors, while allowing police to track down protestors even after demonstrations end.

The indiscriminate use of these technologies during protests undermines the anonymity of protestors and is a violation of the rights to privacy and freedom of expression, as it is likely to discourage some from exercising their rights, and means those protesting risk being profiled, misidentified or targeted with criminal sanctions for participating in protests.

The severity of violations of the right to freedom of expression in the US in recent weeks demands an urgent response. ARTICLE 19 calls on US authorities to take immediate action to: