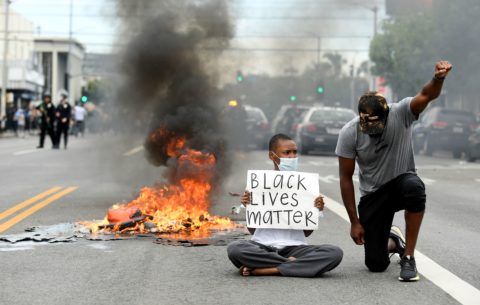 ARTICLE 19 is deeply concerned at the disproportionate and inappropriate  response by some US authorities to the social unrest ignited by the killing  of George Floyd in police custody.

Since 29 May, excessive use of force against protestors in a number of US States has been accompanied by the deliberate targeting  by police of journalists covering the protests, in an unprecedented attack on free speech in the US.

Journalists and protestors have been shot at with pepper bullets, rubber bullets, tear gassed, and pepper sprayed. Police violence has been disproportionately seen against black protestors. Journalists covering the protests have been detained and arrested by law enforcement officers, as well as being attacked and harassed by some protesters.

The protests began in Minneapolis in response to the killing of George Floyd on 25 May in the custody of a Minneapolis police officer, reigniting anger at the large number of black Americans killed in police custody. Demonstrations since then have spread around the country, with protesters demanding greater police accountability and justice, and an end to deep rooted racial inequalities in the US.

Video recordings have documented unprovoked attacks by the police on protestors and journalists who identified themselves and sought to comply with police instructions.

Protests have been met with an increasingly militarized and aggressive response by police. Videos appear to show police in various States shooting rubber bullets at protestors, and even those standing outside their own homes during curfews, as well as driving vehicles into protestors, and undertaking violent arrests. The use of military force against protestors is disproportionate, and must be stopped.

In response, Quinn McKew, executive director of ARTICLE 19, made the following statement:

“The numerous, targeted attacks on journalists are occurring within an increasingly hostile environment for media in the United States, and represent a dangerous path for the country.  The authorities must pull back, and respect the rights to protest, freedom of speech and of the press, as foundational for democracy.  The press are not the enemy; they play a vital role in safeguarding freedoms. Likewise, the right to protest is vital to free expression and the functioning of democracy.

“The video evidence shows the police blatantly targeting clearly identified journalists with violence, when they were just doing their jobs. Violent responses by police to those exercising their right to protest have also been recorded. These are the actions of despots, not democratic authorities. We condemn these actions, and urge accountability not just for attacks on journalists and protestors, but for all those wrongly targeted by police aggression.  We point to the positive actions taken by the police in Iowa, Washington and others to stand with and listen to the protestors, instead of attacking them.”

Reports from the last four days indicate that police officers from different cities across the country are using a range of excessive tactics to push back against protestors in the streets. Reports also confirm the use of military drones from the Customs and Border Patrol (CBP) seen  above the protests in Minneapolis on 29 May. State and federal authorities have deployed National Guard troops and threatened to use military force to enforce curfews and persecute people in the streets. The incendiary communications emanating from the Twitter account of the US President has exacerbated the situation further.

ARTICLE 19 urgently calls on US authorities to protect protesters and the media, and respect the right to freedom of expression.  All states must ensure :