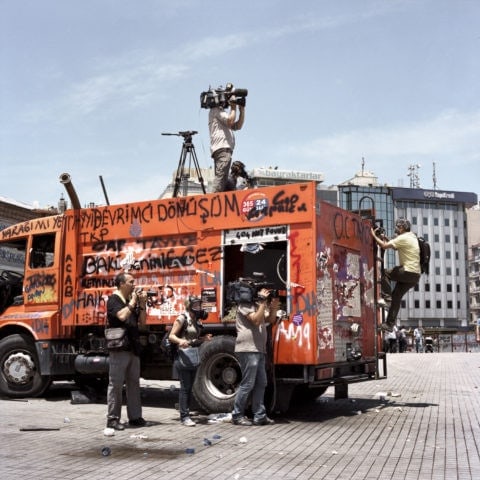 Photographers and film camera people use an abandoned fire vehicle as a vantage point to cover ongoing clashes between police and protestors in Taksim Square.<br><br> Protests against the government of Recep Tayyip Erdogan spread across Turkey after a peaceful sit in organised by environmental activists in Gezi Park were violently broken up by the police, causing numerous injuries. The park had been slated for redevelopment and was to be turned into a shopping complex with a mosque and a replica of a former army barracks. On 4 June 2013, after two deaths amongst the protesters had been confirmed, the Turkish Deputy Prime Minister Bulent Arinc apologised to protesters for the death and injury caused. On 11 June 2013 police moved in to clear the protesters' camp from the square and park and battles ensued with police firing teargas and being pelted with stones. Erdogan's AK Party has been in power for over a decade and many accuse the Prime Minister of becoming increasingly authoritarian, eroding public liberties and imposing Islamic values. Protesters have vowed to continue their activities.

ARTICLE 19 strongly condemns the fatal attack which took place today, in a busy tourist area of Istanbul. At this time, the Turkish government must guarantee freedom of expression, including by ensuring the media are able to report on issues of public concern, as obliged under international law.

“ARTICLE 19 is horrified by today’s bombing and expresses condolences to all those affected and to the people of Turkey” said David Diaz-Jogeix, Director of Programmes at ARTICLE 19.

“At the same time, we are concerned about the imposition of a ban on media reporting on the bombings. Transparent and timely media reporting is absolutely necessary in emergency situations, as it allows people to follow security advice and engage in an open debate on issues of public concern.”

At the present time, it has been reported that ten people have died and 15 people have been injured in the attack, with local residents and tourists among the victims. No group has claimed responsibility for the attack. Just one hour after the explosion, the Higher Council for Radio and Television, a government body, issued a ban on reporting on the attack.

The broadcasting ban was issued under Article 7 of Law 6112 ‘On the Establishment of Radio and Television Enterprises and their Media Services’, which states that in circumstances where possible serious deterioration of public order or national security expressly require it, a temporary publication or broadcast ban may be issued.

ARTICLE 19 is concerned that the ban is not compatible with Turkey’s obligations under international law. Freedom of expression can be limited for the protection of national security and public order, however the circumstances of the limitation must be narrowly and clearly defined so as not to allow abuse. Furthermore, even when justified on the grounds of national security or public order, the limitation on expression must be proportionate.

It is unclear how broadcasting or publishing information on the attack could cause the deterioration of public order or national security, and indeed the banning order itself does not provide any clarity on this, simply stating the ban is deemed appropriate in the circumstances. The order states that the ban is temporary, however there is no specification of the duration of the ban. As the justification is far from clear and sufficient, the ban is in contradiction with international law on freedom of expression. In any case, a total ban on broadcasting on an issue of public concern is never a proportionate response.

ARTICLE 19 is further concerned that a ban on reporting on the bombing could intensify public alarm about the attack. Accurate and timely media reporting during emergency situations is important to provide the public with reliable information, ensuring people are able to follow relevant security advice and engage in open debate on issues of public interest.

ARTICLE 19 calls on the Turkish government to immediately lift the broadcasting ban to protect the space for free and open debate in the aftermath of these attacks.