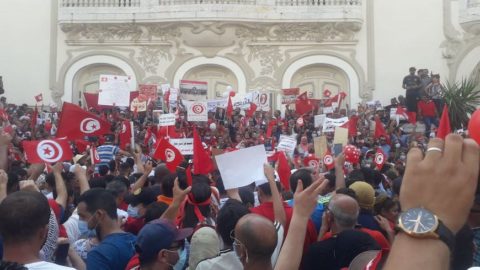 While many recent protests in Tunis have been peaceful, some have turned violent

ARTICLE 19 denounces the brutal attack against a number of journalists by a group of protesters, and calls on the Tunisian authorities to ensure that the aggressors do not enjoy impunity and to deploy greater efforts to protect journalists while they are carrying out their work.

A group of journalists were subjected to a range of attacks during demonstrations against the decisions of the President of the Republic, which that took place in the Tunisian capital on Sunday, 10 October 2021.

Protesters hurled stones and bottles, causing injuries, and some journalists were taken to hospital.

National television press team journalists were attacked, including Ali ben Saeed, Ayman Hadj Salem, Atef ben Hussein and Fadwa Chtourou. The Al-Diwan Radio FM team was also subjected to harassment by the demonstrators, who verbally assaulted by them and told them they were biased and unprofessional, all of which hindered them from completing their work.

ARTICLE 19 reminds Tunisian leaders and citizens of the provisions of Article 12 of Decree Law 115 of 2011 relating to freedom of the press, printing, and publishing, which prohibits attacks on the physical and moral inviolability of journalists and those who enjoy legal protection under Article 13 of the same decree law. It states that “…a person who insults a journalist or assaults him/her” through words, deeds, visible verbal or physical threats while the journalist “carries out his/her work [will be given] a penalty for assaulting a public official as stipulated in Article 123 of the Penal Code.”

In the same context, the Human Rights Council calls on States to “take into account the specific role, exposure and vulnerability of journalists and media workers observing, monitoring, recording and reporting protests and assemblies, and to protect their safety.” [See: 2020 HRC Resolution 45/18 para 10 (g)]

We call on the executive and judicial authorities to ensure that the perpetrators of these horrific attacks do not enjoy impunity, particularly considering that the world is a few days away from marking the International Day to End Impunity for Crimes against Journalists.