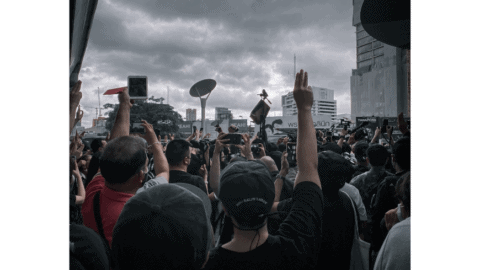 The public prosecutor today indicted 18 activists involved in recent pro-democracy protests in Thailand. Three of the activists—Panusaya Sithijirawattanakul, Panupong Jadnok, and Jatupat Boonpattararaksa—face charges under Section 112 of the Criminal Code, which criminalises defamation, insults, and threats to members of the monarchy. All 18 face sedition charges. The Bangkok Criminal Court subsequently denied bail to Panusaya, Panupong, and Jatupat, who will be imprisoned until their trial. Chaiamorn “Ammy” Kaewwiboonpan, also one of the 18 indicted today, was already in police custody in a separate case under Section 112. The indictment of the 18 activists and detention of Panusaya, Panupong, and Jatupat is the latest development in an escalating crackdown on a youth-led protest movement that has advanced demands to reform the monarchy. In a briefing published last week, ARTICLE 19 highlighted the use of lèse-majesté charges under Section 112 to target protest leaders.

“Having failed to clear the streets using water cannons and tear gas, the government is now mounting a legal attack on protest leaders. The authorities have access to a raft of draconian laws that they can use to arrest, charge, and imprison those calling for reforms or challenging the status quo.

“The use of lèse-majesté charges to detain prominent activists harkens back to previous periods of repression in Thai history. Thailand should release all those detained under Section 112 and ensure its timely repeal. Thai people will never be able to fully enjoy the right to freedom of expression so long as they remain under the shadow of Section 112.

“The ability to protest and criticise powerful individuals is essential to the enjoyment of the right to freedom of expression. Given their prominent role in society, heads of state and other public officials must tolerate a greater degree of scrutiny and criticism than ordinary citizens. This principle has been turned on its head in Thailand.”