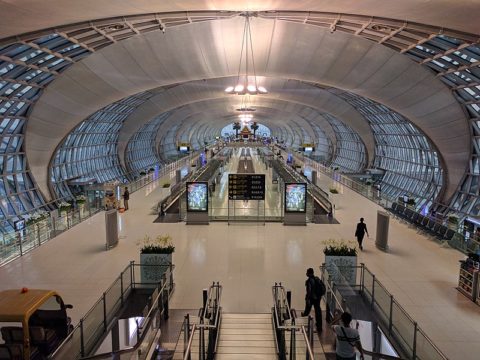 Thai authorities should immediately end criminal proceedings against artist Danai Usama, said ARTICLE 19. Danai will appear in court today in a case concerning a Facebook post describing the lack of screening measures at a Bangkok airport during the COVID-19 pandemic. He is charged under the Computer Crime Act, a repressive law that has often been used to target government critics and human rights defenders.

“It is absurd that an innocuous personal observation on social media has led to criminal charges,” said Matthew Bugher, ARTICLE 19’s Head of Asia Programme. “A thoughtful and effective public health response to the coronavirus pandemic would create space for individuals to share their concerns rather than prompt the prosecution of those who do.”

The charges against Danai relate to a Facebook post he made upon returning to Thailand after a trip to Spain in March. Recalling his arrival at Suvarnabhumi Airport, he wrote, “I didn’t see any screening measures at all… the [other passengers] and I just picked up our luggage and left the airport without being screened.” His post included a photo of the airport he found online.

Danai was arrested on 23 March 2020 at his art gallery in Phuket. He was flown to Bangkok and taken to the office of the Technology Crime Suppression Division of the Royal Thai Police that evening. He was subsequently granted bail at 100,000 baht and released.

Danai faces charges under section 14 of the Computer Crime Act, which provides for up to five years imprisonment for the uploading of “false computer data” that is likely to cause damage to a third party, threaten national security or cause public panic. Human rights organisations, including ARTICLE 19, have highlighted the law’s incompatibility with international human rights law, raising concerns about its vague and overbroad restrictions on expression and highlighting its use to silence government critics and human rights defenders.

On 12 May 2020, Danai appeared in Bangkok Criminal Court for the reading of the complaint. Prosecutors alleged that Danai’s use of a stock photo from before the COVID-19 pandemic falsely led the public to believe that Suvarnabhumi Airport had not implemented COVID-19 screening measures. Prosecutors requested the Court to impose the maximum possible sentence.

Danai will appear in court again today, when the court will hear evidence in the case. On 21 May, ARTICLE 19 and Thai Lawyers for Human Rights submitted a communication concerning the case against Danai to the UN Special Rapporteur on the promotion and protection of the right to freedom of opinion and expression. ARTICLE 19 also highlighted the case against Danai in an oral statement delivered to the Human Rights Council on 2 July.

Thai authorities have used the COVID-19 pandemic as a pretext for restricting expression and targeting government critics. Scores of individuals have been charged for allegedly sharing misinformation about the virus or government response efforts. Police have initiated criminal proceedings against at least 25 individuals involved in peaceful protests for alleged violations of emergency regulations.

In June, Michelle Bachelet, the UN High Commissioner for Human Rights, expressed concern over restrictions on freedom of expression in Thailand during the pandemic. She cited the case against Danai as an example and stated, “People raising legitimate issues of public interest related to COVID-19 are also being targeted, and such action may create an atmosphere of self-censorship”.

“The broad prohibitions on speech in the Computer Crime Act are unjustifiable and ripe for abuse. It is disheartening that they are being applied in such an arbitrary fashion during the pandemic,” said Bugher. “Thai authorities may claim to be acting in the interest of public health, but they are endangering the population by creating an environment in which people are afraid to share information or raise concerns.”