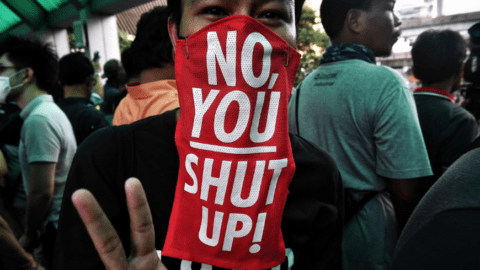 Criminal defamation provisions in Thai law are incompatible with international human rights standards and have been repeatedly used to stifle independent journalism and human rights reporting, said ARTICLE 19 in a new report published today. The Thai government should decriminalise defamation by amending the Criminal Code and Computer Crime Act and should take steps to promote the right to freedom of expression.

“Criminal defamation provisions do more harm than good. They pave the way for the abuse of the criminal justice system by companies and powerful individuals seeking to avoid public scrutiny of their misdeeds,” said Matthew Bugher, ARTICLE 19’s Head of Asia Programme. “Thai society would be healthier and safer if defamation was only a matter of civil law.”

Sections 326–328 of the Thai Criminal Code establish several defamation offences with sentences of up to two years’ imprisonment and fines of up to 200,000 Thai Baht (approximately USD 6,400). The defences to defamation charges provided by the Criminal Code fall far short of international standards. Moreover, private parties may initiate criminal proceedings against others by filing a complaint with the police or directly with courts. These factors open the door to the arbitrary and abusive application of the law against activists, journalists, whistleblowers, and others working to advance the public interest.

The Computer Crime Act also contains provisions that have been regularly used to criminalise online content deemed defamatory. Section 14(1) imposes vastly disproportionate penalties of up to five years’ imprisonment for the uploading of ‘false computer data’ that causes damage to an individual or the public.

In 2018, Thailand amended the Criminal Procedure Code by adding two provisions—Sections 161/1 and 165/2—that provide judges an avenue to dismiss cases that lack merit or were filed in bad faith. However, judges have failed to consistently apply these provisions to prevent vexatious litigation under criminal defamation provisions.

According to statistics provided to ARTICLE 19 by the Office of the Judiciary, public prosecutors and private parties have filed over 25,000 criminal defamation cases with the courts since 2015. The number of cases filed has increased each year. Too often, criminal defamation proceedings have ensnared individuals raising concerns about human rights, labour rights violations, corruption, or government or corporate failures. A single company—Thammakaset Company Limited—is responsible for 39 cases, most concerning civil or criminal defamation, targeting 23 individuals, including migrant workers, human rights defenders, a journalist, an academic, and a former commissioner of the National Human Rights Commission of Thailand. The cases stem from credible reporting of labour rights violations at a poultry farm run by the company. Despite repeated losses in court, Thammakaset has continued to launch new cases.

Because of cases like these, many individuals working to advance the public interest have endured years of investigation and legal proceedings only to be acquitted of all charges. Long and exhausting legal battles and the threat of imprisonment create an atmosphere of fear and self-censorship, severely inhibiting journalism and weakening civil society. Thailand’s experience, like that of other countries, has demonstrated that criminal defamation provisions are unnecessary, susceptible to abuse, and detrimental to the enjoyment of the right to freedom of expression.

The Thai government has already acknowledged the problem posed by frivolous criminal defamation cases. In its National Action Plan on Business and Human Rights, the government stated that plaintiffs have often filed cases in bad faith in an attempt to ‘bully’ human rights defenders and others. However, actions taken to date, including those cited in the National Action Plan, have been insufficient in stemming the tide of baseless criminal defamation complaints.

In its General Comment No. 34, the UN Human Rights Committee urged states to consider decriminalising defamation and stated that custodial sentences are never an appropriate punishment for defamation. The government of Thailand should immediately repeal Sections 326 – 333 of the Criminal Code and amend the Computer Crimes Act to ensure compliance with international standards relating to the right to freedom of expression, including by removing all criminal penalties for defamation.

“The government has already acknowledged the threat posed by frivolous and retaliatory defamation cases targeting human rights defenders. However, the government’s efforts to address this problem have been short-sighted and ineffective,” said Bugher. “Thailand should join the global movement towards the decriminalisation of defamation.”