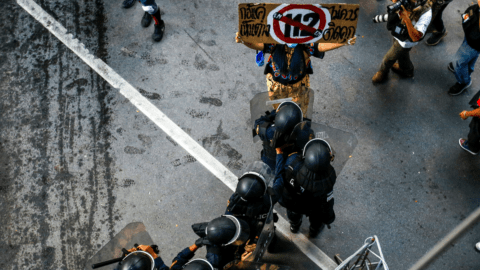 Thailand’s third Universal Periodic Review (UPR) made it clear that more must be done to safeguard freedom of expression, access to information, the right to protest, and digital rights in Thailand, said ARTICLE 19. The government of Thailand should accept all recommendations received during its third UPR and prioritise their prompt and thorough implementation.

“Over the past year the international community has witnessed the Thai government using repressive laws to stifle free speech, restrict the right to protest, and control discourse in digital spaces,” said David Diaz-Jogeix, ARTICLE 19’s Senior Director of Programmes. “The UPR presents a unique opportunity for Thailand to reverse its dystopic decline and it is imperative that the government of Thailand seizes this opportunity.”

On 11 November 2021, the Working Group of the UPR conducted Thailand’s third UPR during its 39th session. The UPR is a unique mechanism of the UN Human Rights Council during which each UN member state undergoes peer review and makes commitments to improve its human rights record. 106 states made a total of 278 recommendations to Thailand, urging action to improve the human rights situation in the country.

In its UPR submission, ARTICLE 19 addressed three key threats to expression in Thailand: restrictions on the right to protest, lèse-majesté proceedings, and criminal defamation prosecutions. In a second joint submission, ARTICLE 19, Manushya Foundation, AccessNow, and the ASEAN Regional Coalition to #StopDigitalDictatorship raised concerns about the proliferation of threats to digital rights in the country. Recommendations were delivered on all of these issues during Thailand’s third UPR.

Thailand has experienced an unprecedented surge in protests in 2020 and 2021 with protesters—including many children under the age of 18—repeatedly taking to the streets to demand a new constitution, the resignation of the Prime Minister, reform of the monarchy, and an end to the harassment and intimidation of government critics. Thai authorities have responded to protests with an iron fist. The government has harassed, assaulted, and obstructed protesters at every turn. Riot police have forcefully dispersed crowds with batons, rubber bullets, tear gas, and water cannons, at times resulting in severe injuries to protesters and journalists. Security forces have also sought to deny access to protest sites and authorities have shut down transportation networks to prevent crowds from gathering.

The prosecution of protesters and protest organisers has been another tactic of the Thai authorities to stifle freedom of assembly. Between July 2020 and September 2021, at least 1,458 individuals including 223 minors were investigated or charged due to their participation in protests. Many protest leaders have been charged multiple times, and several face decades of imprisonment.

In the draft UPR report Thailand provisionally supported only six of the 18 recommendations made regarding the right to protest, with the remaining 12 still pending a response. The recommendations thus far supported by Thailand include calls to ensure legislation on freedom of assembly complies with international obligations and to improve capacity of law enforcement to respect the right to protest.

12 states recommended Thailand to either review is use of, or reform, Section 112 of the Criminal Code, Thailand’s lèse-majesté provision, which prohibits insults to the monarchy. Austria, Belgium, Canada, Denmark, Finland, France, Germany, Luxembourg, Norway, Sweden, Switzerland and the United States of America all made such recommendations. Austria, Denmark, and Finland recommended to end or review the application of lèse-majesté against minors in particular.

Section 112 is one of the harshest lèse-majesté provisions in the world. In late 2020, after a two-year de facto moratorium on the use of Section 112, authorities again began to use the section to investigate and charge individuals for alleged lèse-majesté offences. Section 112 has been interpreted in a broad manner in the past and comes with a harsh penalty. Each offence carries up to 15 years’ imprisonment and a fine. Between November 2020 and October 2021, the Thai police have opened investigations into at least 150 individuals for alleged lèse-majesté offences. Many of these cases appear to target individuals associated with the protest movement. At least 34 of the individuals charged under Section 112 are being prosecuted for giving speeches at rallies. 68 more individuals have been charged for their online expression. At least 12 of those charged are under the age of 18.

During its UPR session, Thailand showed no intentions of heeding the recommendations regarding Section 112. A foreign ministry representative stated that the provision “reflects the culture and history of Thailand, where the monarchy is one of the main pillars of the nation, highly revered by the majority of Thai people,” and justified the provision based on the need to safeguard national security. On 10 November 2021, the same day as Thailand’s UPR review session, the Constitutional Court ruled that speeches about reform of the monarchy delivered by protest leaders in 2020 are unconstitutional and could therefore be charged under the crime of treason—a crime that carries the death penalty. In the draft UPR report dated 12 November, Thailand had not yet provided a response to any of the 12 recommendations made regarding lèse-majesté.

In Thailand, defamation is a criminal offence punishable by custodial sentences. Criminal defamation provisions are unnecessary, susceptible to abuse, and detrimental to the enjoyment of the right to freedom of expression. During Wednesday’s session, Belgium, Germany, Luxembourg, and Switzerland made recommendations urging the decriminalisation of defamation and adoption of legislation to protect against strategic lawsuits against public participation (SLAPPs).

Thailand has not yet provided a response to any of the recommendations regarding reforming criminal defamation provisions, but it did note support for Belgium’s recommendation calling for legal protection against SLAPPs to be enacted. In December 2018, Thailand’s National Legislative Assembly amended the Criminal Procedure Code to include two provisions, Sections 161/1 and 165/2, to prevent vexatious defamation lawsuits. However, they have proven ineffective as judges have failed to consistently apply them in spurious criminal defamation cases.

The protection of digital rights was raised in nine different recommendations. States called for Thailand to protect expression online, review, repeal, or amend the Computer Crimes Act, narrow the digital divide, and enact a law on data protection.

In recent years Thailand has been slipping into a digital dictatorship, with increasing authoritarian policies and abuse of laws aimed at eliminating citizens’ basic human rights online. Digital rights concerns include the erosion of freedom of expression online, the lack of data protection, state surveillance and infringement of online privacy, rising state control over tech companies, and the harassment, intimidation, and attacks against human rights defenders, civil society activists, and journalists for their online activities.

In the draft UPR report, Thailand expressed support for three of the digital rights recommendations, including a call to enact data protection legislation and to narrow the digital divide. The remaining six, which reference Thailand’s Computer Crime Act and the protection of online expression, remain to be examined by Thailand.

ARTICLE 19 calls on Thai government to accept each recommendation on the rights to freedom of expression, access to information, peaceful assembly, and digital rights, and encourages immediate and effective implementation to improve its human rights situation.

“Thailand’s assault on fundamental freedoms must end,” said Diaz-Jogeix. “Authorities should heed the recommendations made during Thailand’s UPR and take seriously its obligations to remedy human rights violations.”