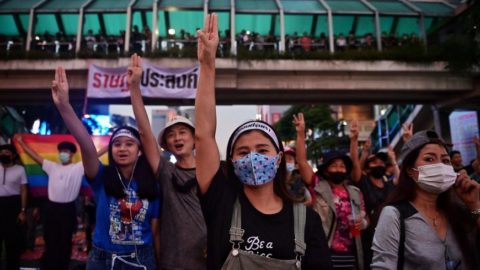 ARTICLE 19 has submitted a Universal Periodic Review (UPR) report on the situation of freedom of expression in Thailand. The submission details how repressive legal provisions are utilised to silence human rights defenders and journalists, punish and deter peaceful protesters, and encourage self-censorship instead of public participation.

The UPR is a unique mechanism of the UN Human Rights Council, through which each UN Member State makes commitments to improve its human rights record, following an assessment of progress made against previous commitments. Thailand will be reviewed at the 39th Session of the Working Group of the UPR in October or November 2021.

This is the third time Thailand has undergone review under the UPR, and our submission details the Thai government’s failure to fulfil previous UPR recommendations on the freedom of expression.

The Public Assembly Act, the primary law governing assemblies in Thailand, has been used repeatedly to arrest, charge, and prosecute people exercising their right to protest. In 2020, Thailand declared a state of emergency and imposed a broad and vague ban on assemblies through an emergency regulation. The regulation was applied in a strict and discriminatory manner against pro-democracy protesters further deterring the exercise of peaceful assembly in Thailand.

The Thai Criminal Code criminalises legitimate exercises of expression through problematic offences including defamation and lèse-majesté provisions. The Computer Crime Act contains a provision penalising the uploading of ‘false computer data’ which is often used to impose criminal penalties on those exercising their right to freedom of expression. These provisions have been routinely abused to target human rights defenders, journalists and independent media, creating a chilling effect on freedom of expression in the country.

ARTICLE 19 highlights these concerns in detail in the submission, and proposes concrete recommendations that States must direct to Thailand during the upcoming UPR to ensure the right to freedom of expression in the country.