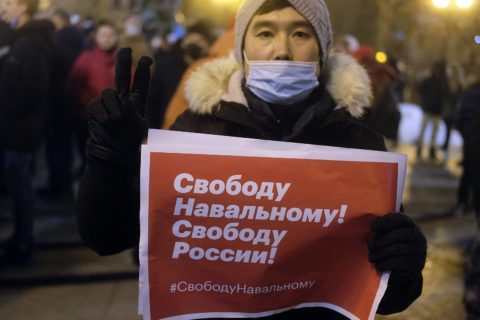 Ahead of the parliamentary election on 17-19 September, the Russian authorities have intensified the crackdown on freedom of expression and access to information in the country as websites affiliated with the opposition leader Alexey Navalny, popular independent media outlets and civil society organisations (CSOs) have been the target of a new wave of repression.

On 26 July 2021, the Russian censorship agency Roskomnadzor blocked 49 websites linked to the jailed Kremlin critic Alexei Navalny, 38 of which belong to Anti-Corruption Foundation (FBK) and its regional headquarters. Just a few weeks earlier, Moscow’s city court declared Navalny’s movement ‘extremist’ and banned it in Russia. Soon afterwards mobile operators and providers started to block the ‘Alexey.Navalny’ app, which has over 500 thousand downloads on Google Play. In September, Roskomnadzor launched an attack against the ‘Smart Voting’ initiative – a tactical voting strategy put forward by the team of Navalny with the aim of consolidating the votes of those citizens who oppose the United Russia ruling party. Initially, the Moscow arbitration court attempted to ban Google and Yandex from displaying the phrase “smart voting” in search results. When Google refused to remove the ‘Smart Voting’ site from its servers, Roskomnadzor decided to block Google in Russia on charges of ‘extremism’. According to the Russian opposition, these attacks are linked to the government’s efforts to prevent independent opposition from active participation in the upcoming parliamentary elections.

Since April 2021, at least 30 journalists and media outlets have been labelled ‘foreign agents’ by the Russian Ministry of Justice, including Latvia-based online newspaper Meduza, a business magazine VTimes, the country’s largest independent online broadcaster Dozhd (TV Rain), and two investigative platforms, Vazhnyie Istorii (IStories) and The Insider. A few days earlier, police officers searched the apartment of Roman Dobrokhotov, the editor-in-chief of The Insider. In July, several reporters of Radio Free Europe / Radio Liberty, as well as Open Media and MBKh were also included on the list of ‘foreign agents’, after which Roskomnadzor blocked their websites. Another prominent investigative outlet, Projeсt Media, was banned after being labeled an ‘undesirable organization’ by the Prosecutor General’s office on 15 July 2021. Eight journalists and Projeсt Media’s editor-in-chief were listed as “foreign agents”. Earlier in June, police raided their homes forcing some to flee Russia to avoid potential criminal prosecution.

Between June and September this year, at least 14 non-governmental organizations with foreign registration have been placed on the list of ‘undesirable organizations’ by the Russian Ministry of Justice. The ‘undesirable organizations’ law (officially Federal Law of 23.05.2015 N 129-FZ ‘On amendments of some legislative acts of the Russian Federation’) gives prosecutors the power to extrajudicially declare foreign and international organizations “undesirable” in Russia and ban them from operating in the country. The first organisation targeted was the Czech Association for Freedom of Information (Spolecnost Svobody Informace) that was banned in Russia at the end of June. Another victim of this repression has been human rights defender organization Team 29. The authorities accused it of cooperating with the aforementioned “undesirable” Czech CSO and blocked the organization’s website, after which its team decided to self-liquidate. A similar attack was launched by Roskomnadzor on the popular Gulagu.Net project which provides information about corruption in government institutions, at the end of July in response to the refusal to provide personal data of the website visitors. The project team was informed that the access to its website would be restricted.

“The current crackdown can be understood as a clear, systematic and accelerated attempt by the Russian Government to restrict the free flow of information through the Internet and independent media outlets ahead of September’s parliamentary elections. President Putin fears mass protests like those in the aftermath of the rigged election in August 2020 in Belarus. This latest wave of repression is particularly alarming given the already restrictive environment for independent media in Russia and the role these actors play in facilitating open debate and exchange of critical ideas,” said Sarah Clarke, Head of Europe and Central Asia at ARTICLE 19.

ARTICLE 19 reiterates that elections constitute a comprehensive process encompassing all relevant aspects of the human rights situation in a given country and stretching over significant periods of time before and after an election day. In their Joint Declaration on freedom of expression and elections in the digital age, Special Mandates on Freedom of Opinion and Expression highlighted “essential role that freedom of expression and information, free, independent and diverse media and a free and accessible Internet play in ensuring free and fair elections, in particular by informing the public about parties and candidates and their platforms.” They have also warned states against unduly influencing media reporting and obstructing access to Internet and digital technologies during the election period.

ARTICLE 19 strongly condemns the silencing of independent voices by the Russian authorities and calls for the immediate unblocking of online resources and an end to the persecution of independent media and journalists as well as civil society organisations.