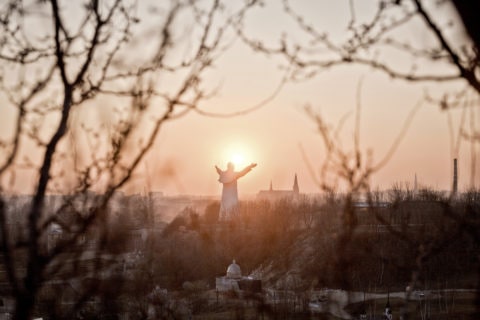 The sun sets above the tallest statue of Pope John Paul II in the world near the town of Czestochowa, the religious centre of Poland where the Jasna Gora monastery is situated. The figure is 13.8 metres high and was unveiled in April 2013. Polish born John Paul II (whose real name was Karol Jozef Wojtyla) led the Catholic Church from 1978 until his death in 2005. He will be made a saint by Pope Francis on 27 April 2014.

In July 2015, ARTICLE 19 submitted an amicus brief with the Polish Constitutional Court in a case challenging the criminalisation of blasphemy in the country.

Case SK 54/13 deals with the constitutionality of Article 196 of the Polish Criminal Code, which penalizing “offence to religious feelings” through “public calumny”. The term “calumny” means making false or defamatory statements in order to damage reputation. Article 196 is thus comparable to laws which seek to criminalise “defamation of religions” or blasphemy.

Article 196 has been relied upon in many cases involving the use of religious symbols in different forms of art. These cases include those of The Krasnals, an anti-establishment art collective, and the pop singer Dorota Rabczewska, the appellant in the present case.

The number of convictions under these provisions in the country is not very high, but the law exerts a “chilling effect” which results in self-censorship, particularly on matters involving religion. Given the investigations, charges and court proceedings brought against painters, writers, performers and other artists under Article 196 of the Criminal Code over recent years, it is highly likely that there is an especially acute effect on artistic expression, and that artists in Poland are regularly engaging in self-censorship.

ARTICLE 19 has long argued that laws seeking to prevent discussion and debate on religion – including laws on blasphemy, religious insult and defamation of religion – are fundamentally incompatible with international and European human rights law. Such laws violate a number of legally binding provisions on freedom of opinion and expression, freedom of thought, conscience and religion, equality and freedom from discrimination. Such laws should therefore be repealed.

In the brief, ARTICLE 19 highlights international human rights standards that should be considered by the Constitutional Court in this case. It concludes that Article 196 of the Polish Criminal Code, a law on offence to religious feelings, is incompatible with Poland’s international and regional human rights treaty obligations on freedom of expression, freedom of religion or belief, and equality and non-discrimination, all of which Poland has a duty to implement into its domestic law and policy.