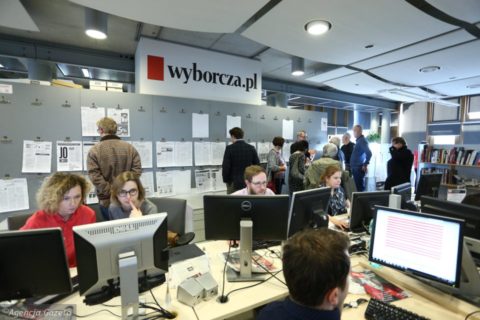 In response to the growing threat to press freedom in Poland , ARTICLE 19, as part of a consortium Media Freedom Rapid Response which tracks, monitors and responds to violations of press and media freedom in EU Member States and Candidate Countries,  will monitor in the upcoming months trials targeting journalists affiliated with Gazeta Wyborcza, one of the biggest newspapers in Poland. Since 2015, Gazeta Wyborcza has received over 55 legal threats, including civil defamation actions and alleged infringement of personal interests by a number of actors including Jarosław Kaczyński, the head of the governing Law and Justice (PiS) party; the public television broadcaster, Telewizja Polska SA and state owned companies.

The first case which Media Freedom Rapid Response representatives will monitor is scheduled for 18 September 2020 in the Regional Court in Warsaw, 24th Civil Division (case No: XXIVC 520/17). The case concerns an article published on wyborcza.pl website titled “Jacek Kurski cenzuruje Opole” (Jacek Kurski censors the Opole Festival) where a journalist expressed a critical opinion regarding public broadcaster director’s engagement in censoring artists at the famous music festival, Opole. The case was brought by the public broadcaster Telewizja Polska SA (TVP) “for protection of personal rights” [in Polish ”pozew o ochronę dóbr osobistych”] under Articles 23 and 24 par. 1 of the Civil Code against Agora SA, the paper’s publisher, Agnieszka Kublik, author of the article, and Dorota Goluch, editor-in-chief of wyborcza.pl. The plaintiff demands to publish an apology and a payment of PLN 20 000 [EUR 4600, US $ 5200] to a nominated charity.

This is not the first time ARTICLE 19 has expressed concern regarding the actions of the public broadcaster, Telewizja Polska SA. In a recent statement we  highlighted the biased and imbalanced reporting of the presidential campaign and TVP’s role in amplifying the government’s discriminatory rhetoric against minority groups. We also continue to monitor SLAPP cases brought by the Law and Justice ruling party and the public broadcaster against professor Wojciech Sadurski.

These are SLAPP suits – vexatious lawsuits, designed to harass, intimidate and silence those who speak out against the Polish authorities and their affiliates. Such meritless defamation cases pose a significant threat to freedom of expression in Poland. We also have serious concerns about the fairness of the trials, following the recent crackdown on the independent judiciary in the country.

In July 2020, The Media Freedom Rapid Response has responded to the legal threats made against Gazeta Wyborcza by contributing €15,000, it’s largest grant to date, to support the outlet’s legal defence.