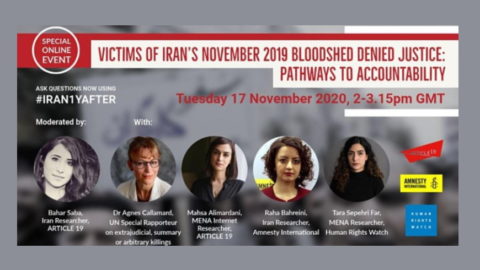 To mark the one-year anniversary of a deadly crackdown on nationwide anti-establishment protests in Iran, ARTICLE19, Amnesty International and Human Rights Watch are hosting an online expert panel on Tuesday 17 November 2020. The event will shed light on the litany of serious human rights violations committed by Iran’s security forces and discuss the international mechanisms urgently needed to hold those responsible to account.

The nationwide November 2019 protests were met with a brutal campaign of mass repression – facilitated by a near total Internet shutdown – with hundreds of protesters and bystanders unlawfully killed and many more injured and thousands arbitrarily arrested.  To this date, no independent, impartial and transparent investigation into these serious human rights violations has been carried out by the Iranian authorities. Those responsible continue to enjoy absolute impunity while victims, survivors and the society as a whole are denied truth and justice.

On 17 November, Agnes Callamard, the United Nations Special Rapporteur on extrajudicial, summary or arbitrary executions, will join experts from ARTICLE19, Amnesty International and Human Rights Watch to examine the human rights violations committed during and in the aftermath of the November 2019 protests, including the violations of the rights to life, liberty and security of person, freedom of peaceful assembly and expression. The event aims at expanding the discussion on how Iran can be held to account through the UN mechanisms.

Amnesty International, ARTICLE19 and Human Rights Watch have documented the serious human rights violations committed in the context of November 2019 protests and their aftermath, including the Iranian authorities’ unwarranted, intentional lethal use of force resulting in the killing of protesters and bystanders, torture and other ill-treatment of detainees and the Internet shutdown imposed shortly after the protests broke out. Amnesty International has verified that at least 304 men, women and children were killed by security forces following the eruption of protests on 15 November 2019. Jointly, all three organisations renew their call on the member states of the United Nations Human Rights Council to mandate a UN-led inquiry into the unlawful killings of protesters and bystanders, as well as the widespread and systematic patterns of mass arrests, enforced disappearances, torture and unfair trials of detainees, that took place during and in the aftermath of the November 2019 protests with a view to ensuring accountability.

Information on joining the online event

We invite you to register to attend on Eventbrite. All registered guests will be notified closer to the date of the Zoom link where they can join our discussion, which will take place on 17 November 2020 from 2:00 to 3:15 PM GMT. We will also notify participants of livestream options that will be available on ARTICLE19’s social media channels.

Dr. Agnes Callamard is the Director of Columbia Global Freedom of Expression at Columbia University and the U.N. Special Rapporteur on extrajudicial, summary or arbitrary executions (2016-2022).  She lectures on free speech and human rights in Europe and North America. She has led human rights investigations in more than 30 countries, and has investigated murders of journalists, including that of Saudi journalist Jamal Khashoggi. She directed the global freedom of expression organization ARTICLE 19 for nine years, and was Chef de Cabinet for the Secretary General of Amnesty International.

Mahsa Alimardani is an Internet researcher with a focus on technology and human rights. She has worked on issues related to access to the Internet for the past eight years, developing advocacy, educational and research projects within civil society and academia. She’s also a PhD researcher at the Oxford Internet Institute, examining the issue of political communications online in Iran, and was a Senior Information Control Fellow for the Open Technology Fund and a Resident at the Bonavero Institute for Human Rights, at the University of Oxford. She currently leads ARTICLE19’s research on access to the Internet in Iran.

Raha Bahreini is an Iranian-Canadian human rights lawyer with expertise in international human rights law. She works as Amnesty International’s researcher on Iran. Before that, she assisted the work of the UN Special Rapporteur on the Situation of Human Rights in Iran. Bahreini’s work has engaged with a wide range of human rights issues including the death penalty, freedom of expression, association and assembly, torture, women’s rights, discrimination against minorities, gender identity and sexual orientation rights, and transitional justice.

Tara Sepehri Far is a researcher in the Middle East and North Africa Division of Human Rights Watch, where she investigates human rights abuses in Iran and Kuwait. Prior to joining Human Rights Watch, she was the Deputy Director of the Human Rights in Iran Unit at the City University New York, where she worked on a project supporting the mandate of the United Nations Special Rapporteur on the situation of human rights in Iran. Tara graduated from Sharif University of Technology in Tehran and holds M.A. and LL.M degrees in international law from the Fletcher School of Law and Diplomacy at Tufts University. She is a native Farsi speaker.

Bahar Saba is a human rights researcher currently leading ARTICLE 19’s transparency work on Iran. Prior to joining ARTICLE 19, she was a researcher at Amnesty International, where she worked on a wide range of human rights issues including the death penalty, torture, freedom of expression, association and assembly, and discrimination against minorities, as well as a Caseworker at Reprieve, where she focused on the death penalty in Egypt, Saudi Arabia, Bahrain and the UAE. She holds an LLB, an LLM in human rights law and an MPhil in Modern Middle Eastern Studies.