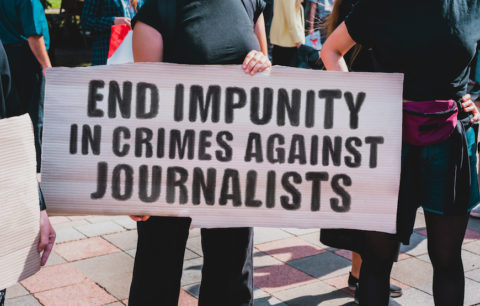 ARTICLE 19 is deeply shocked by the murder of journalist Titus Badejo on 19 June. We strongly condemn this heinous crime and urge the Nigerian government to undertake an impartial and thorough investigation into the case and prosecute the perpetrators.

On Saturday, 19 June, Badejo, the former presenter and on-air personality for Naija FM, was murdered by unknown gunmen while he was leaving a club with friends at approximately 11:30pm.

Badejo was ordered to stop his car and the unknown gunmen asked all passengers to lie down on the ground. He was shot dead by the gunmen who then immediately fled. According to media, no one else was shot and the gunmen took nothing from the group.

“The murder of Titus Badejo is a heinous crime. The circumstances of this murder suggest that he was targeted. Nigerian authorities should do their uttermost to swiftly investigate this crime and bring culprits to account. The culture of impunity must end now.”

The killing of journalists reinforces the climate of fear and has a chilling effect on freedom of expression in the country. The last murder of journalist in the country occurred in October 2020, with an ARTICLE 19 report highlighting two cases of killing. Since those murders took place no one has been held responsible for these crimes.

Most recently, on May 2021, the journalist Peter Nkanga, a human rights activist and member of AfricTivistes, was the target of a death threat following the release of the BBC News Africa  documentary “Nigeria’s Ordinary President”.

“Impunity helps build a breeding ground for recurrent crimes against journalists in Nigeria, undermining the freedom of media and the rights to freedom of expression and access to information for the public. Nigerian authorities must now show that they care for the safety of journalists by tracking down the perpetrators of this killing and previous attacks and bringing them to justice.  They must also take concrete measures to put an end to the pattern of attacks against journalists and the media”, added Bulakali Alfred Nkuru.

The UN has called on states to “ develop and implement strategies for combating impunity for attacks and violence against journalists, including by, inter alia, (i) creating special investigative units or independent commissions, (ii) appointing a specialised prosecutor, and (iii) adopting specific protocols and methods of investigation and prosecution. It has further outlined the steps states must take to prevent violence against journalists, protect them from such attacks, and bring perpetrators to justice.

During its last UPR review, Nigeria committed to protecting and promoting freedom of expression and to creating a safe and favourable environment for journalists in the country. Ensuring accountability for killings of journalists, including Titus Badejo, is a crucial step for creating such an environment and the protection of freedom of expression.