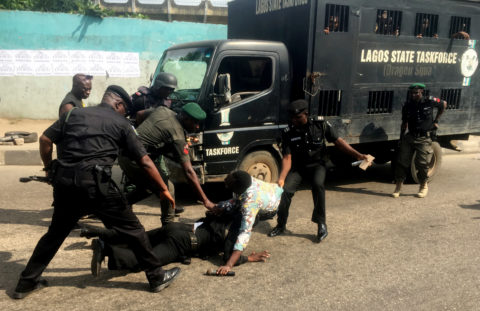 ARTICLE 19 reveals today in a briefing a significant increase in assaults, arrests and prosecution of the media in Nigeria compared to 2019, with 51 incidents in 2020 alone.

The attacks more than doubled in 2020. In the same period in 2019, at least 19 journalists and media professionals suffered attacks, including arrests, detention, assaults, threats, and seizure of equipment.

The key findings of the 51 crimes against in total 60 journalists documented from January to October 2020:

The security forces and government officials were behind the vast majority of these incidents, while eight attacks were by unknown ‘gunmen’ and six by political thugs.  The authorities not only failed to protect journalists from attacks, but are increasingly trying to silence the media.

“As we commemorate International Day to End Impunity for Crimes against Journalists, I would like to urge the African Union and United Nations not to turn a blind eye to Nigeria. The climate in Nigeria is increasingly hostile for media and journalists, that I am pleading with the international community to support Nigeria to end impunity, protect journalists and strengthen the legal framework governing the media.

The complete impunity for crimes against journalists in Nigeria is suffocating the media. Without a free media, no country can realise the rights included in the Universal Declaration on Human Rights and the Sustainable Development Goals. Nigeria must act now.”

ARTICLE 19 urges Nigeria to set up an independent panel to investigate all the attacks against journalists as well as all cases of arrest and prosecution and review the legislation that is being used to stifle the media, such as the cybercrime act.  All journalists that are currently in detention for doing their work, should be immediately released.

In 2020 we have seen an increase in arrests of bloggers and journalists under suspicion of ‘cyberstalking’.  The government has abused this section of the Cybercrime act to “silence” opposition views in the online media.  In addition, ARTICLE 19 received reports that countless other journalists have faced issues like equipment seizure or damages, intimidation and death threats.

“Attacking and injuring a journalist in the line of duty is unacceptable. The frequency at which Nigeria’s police and military attack and threaten journalists is very alarming. We strongly condemn the attacks against journalists.

This year, Nigeria needs to use International Day to End Impunity for Crimes against Journalists as an opportunity to improve this appalling record. The government must commit to end these attacks and amend its laws to enable a climate of free media and free speech. The government must provide justice and remedies to victims. They must make protection and security of journalists a national priority.”

ARTICLE 19 calls on the United Nations Special Rapporteurs of freedom of expression and opinion and on extrajudicial killings and the African Commission and Human and Peoples’ Rights Special Rapporteur on freedom of expression and information to urge the Nigerian government to investigate these crimes and issue a joint recommendation, provide support for its implementation and monitor the progress.

Doing so will ensure Nigeria complies with its international human rights commitments. During its last UPR review in 2018, Nigeria committed to protect and promote freedom of expression, association and peaceful assembly, and to create a safe and favourable environment for human rights defenders, journalists and civil society. Still, Nigeria has not put these commitments into practice.