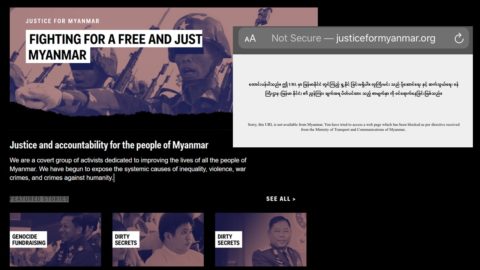 The Myanmar government’s order to block the website of a human rights campaign violates the right to freedom of expression and access to information, said ARTICLE 19. The order comes on the heels of several measures aimed at suppressing criticism of the Myanmar military.

“The Myanmar government has become increasingly brazen in its efforts to silence critical voices”, said Matthew Bugher, ARTICLE 19’s Head of Asia Programme. “The order to block a website reporting on the misdeeds of the Myanmar military strikes at the heart of the right to freedom of expression.”

On 27 August 2020, telecommunications operators received a directive to ‘block a named website and three associated IP addresses’ on the basis that it was spreading ‘fake news’ and ‘rumors’. News outlets later reported that the website of the human rights campaign called ‘Justice for Myanmar’ was the blocked website. Justice for Myanmar describes itself as a ‘covert group of activists dedicated to improving the lives of all the people of Myanmar’ and has published stories on corruption and the economic interests of the Myanmar military.

A government spokesperson stated that the order was issued based on a complaint by a social media monitoring group linked to the military.

The order follows a similar directive issued in March of this year, which blocked several ethnic news websites on the basis that they had spread ‘fake news’.

In responding to the March 2020 directive, ARTICLE 19 raised concerns that measures designed to censor ‘fake news’ frequently violate the right to freedom of expression. They are often not narrowly tailored to address a legitimate aim and are applied when less restrictive means of addressing the alleged harm are available. Four freedom of expression rapporteurs have stated that, ‘general prohibitions on the dissemination of information based on vague and ambiguous ideas, including “false news” or “non-objective information”, are incompatible with international standards’.

ARTICLE 19 noted that where legitimate aims are in fact threatened, less intrusive measures, such as addressing specific content, rather than blocking entire websites, are available. The blocking of entire websites is an extreme measure that should only be taken in accordance with clear procedural protections. In general, websites should only be blocked by a court or other independent and impartial adjudicatory body that has determined that blocking is necessary and proportionate to a legitimate aim. In any case, those impacted by the blocking, including telecommunications operators, website operators, and civil society organisations, should have an opportunity to be heard in court.

“The government is slowly rolling back freedoms brought by the digital revolution in Myanmar”, said Bugher. “This escalation of control of online spaces information threatens democratic rights and entrenches impunity for human rights violators.”