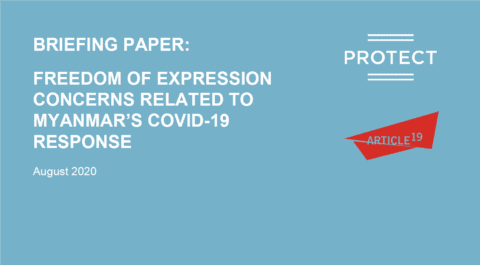 The Myanmar government’s response to the COVID-19 pandemic has exacerbated pre-existing threats to freedom of expression in the country, ARTICLE 19 said in a briefing published today. Authorities have used the pandemic as a pretext for silencing critical voices and have adopted new forms of repression.

“The COVID-19 pandemic and the upcoming elections have intensified a campaign to silence any criticism of the government, whether explicit or implicit”, said Matthew Bugher, ARTICLE 19’s Head of Asia Programme. “It’s difficult to imagine anyone voicing concerns about the government’s COVID-19 response without fear of retaliation.”

ARTICLE 19’s briefing explores concerns relating to freedom of expression and civic space that have emerged during the COVID-19 pandemic. The briefing specifically addresses concerns relating to access to information, ‘hate speech’, the implementation of emergency measures, and criminal prosecutions of those exercising their right to freedom of expression. It concludes with recommendations to the Myanmar government on how to address the pandemic in a manner that it consistent with its obligations under international human rights law.

In recent months, the Myanmar authorities have prosecuted journalists, human rights defenders, and others who have challenged the government’s narrative concerning the pandemic. The two-year prison sentence handed to Dae Pyaw news agency editor Zaw Min Oo, also known as Zaw Ye Htet, for allegedly reporting false information about the virus is egregiously disproportionate and has a chilling effect on COVID-19 reporting.

The government has blocked access to ethnic media websites based on the inaccurate claim that they have spread ‘false news’ about the pandemic. While 2G Internet service in Rakhine and Chin States has been restored after being blocked for more than a year, 3G and 4G services remain blocked. Connections are reportedly so slow that mobile users are unable to load webpages or use apps, calling into question the significance of the government’s change in policy.

Doubling down on its efforts to control expression during public health crises, a proposed amendment to Myanmar’s communicable diseases law would provide another tool to criminally penalise those who speak, write or share information about contagious diseases.

During the pandemic, ‘hate speech’ has been directed at ethnic and religious minorities – particularly Rohingya, Muslims, and Christians – as well as migrant workers and refugees returning from abroad. While the government has taken some steps to encourage the public to refrain from engaging in ‘hate speech’, ARTICLE 19 remains concerned that repressive legislation being developed by the Myanmar government would nullify those gains and could backfire, potentially exacerbating the root causes of intolerance.

At the onset of the COVID-19 pandemic, Myanmar adopted emergency measures to slow the transmission of the virus. Concerns have been raised about the discriminatory implementation of these measures to the detriment of Myanmar’s ethnic and religious minorities.

The government’s failure to proactively and consistently disclose information during the pandemic has undermined public confidence in its response to the virus. Although the government now maintains a publicly available dashboard on COVID-19 cases and deaths, transparency is lacking around economic programmes and other remedial measures. Further, the government has failed to publish all minutes of official meetings, working documents, or expert advice provided to the government – documents which would better allow the public to assess the efficacy of its response.

The threat posed by the COVID-19 pandemic is unlikely to abate in the coming months. Recent experience has shown that countries that have seemingly gained control over the virus can suffer outbreaks and be quickly thrust into an emergency situation. The Myanmar government must prepare to address the ongoing dangers presented by the pandemic without trampling on human rights, including the rights to freedom of expression and access to information.

“This public health crisis is a marathon, not a sprint,” said Bugher “Ensuring transparency and allowing for more open public discourse about the pandemic will help the Myanmar government ensure its response is effective in the long run.”

READ THE BRIEFING PAPER IN ENGLISH.

READ THE BRIEFING IN MYANMAR LANGUAGE.