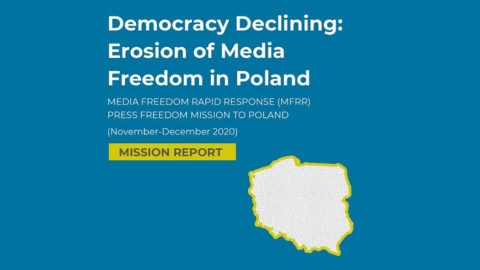 Media freedom in Poland now faces its greatest set of challenges since 2015 as the government continues to wage a multi-pronged attack on independent media to muzzle critical reporting and undermine watchdog journalism, according to a new report published today by the Media Freedom Rapid Response (MFRR).

The report, Democracy Declining: Erosion of Media Freedom in Poland, is published in English and Polish and presents the findings of the international press freedom mission carried out virtually by the seven partners of the MFRR between November and December 2020.

The mission was led by the International Press Institute (IPI) and joined by Article 19, the European Centre for Press and Media Freedom (ECPMF), the European Federation of Journalists (EFJ), Free Press Unlimited (FPU) and Osservatorio Balcani Caucaso Transeuropa (OBCT).

The delegation met with key stakeholders including a wide range of editors-in-chief and journalists from across the political spectrum, as well as academics, journalist associations, civil society organizations, the Polish Ombudsman, diplomatic missions and MEPs.

The centre piece of PiS’ plans for media reform have been efforts to “repolonise” and “deconcentrate” the media market. Ostensibly aimed at creating greater pluralism, in reality these dual legal mechanisms are intended to concentrate more media under the control of the ruling party and its allies.

Faced with major political and diplomatic hurdles, so far draft legislation has yet to be introduced to parliament and PiS has instead been forced to search for alternative methods to achieve its aims. Initial efforts to copy the Hungarian system of having pro-government oligarchs step in and buy up independent titles have so far been unsuccessful.

Instead, PiS has pioneered a form of media capture unique within the European Union: the nationalisation of private media companies via state-owned and controlled companies. This model achieved its first results in December when a state energy firm headed by PiS appointees acquired control of Polska Press, in a deal that hands PiS indirect control over 20 of Poland’s 24 regional newspapers. The appointment of pro-government executives and journalists and a slow erosion of editorial independence is widely expected to follow.

By achieving this acquisition without legislative changes, the government engineered the long-awaited takeover of a foreign-owned media company without provoking diplomatic repercussions with other EU member states or a head-on collision with Brussels over the rule of law. The state energy giant PKN Orlen is now likely to remain the economic engine of PiS’ media capture model.

The bulk of PiS’s attacks are reserved for a handful of large and influential liberal-leaning private media which remain openly critical of the ruling party and its policies. In the absence of “deconcentration” legislation, PiS is instead waging a coordinated and concerted campaign of administrative pressure against these outlets aimed at destabilising and undermining their businesses.

State resources meanwhile continue to be weaponized to starve certain media of public advertising revenue. Since 2015, state institutions and state-owned and dependent companies stacked with PiS loyalists have ceased to subscribe to or place advertising in independent media, cutting off an important source of funding in a policy of economic strangulation.

In an extension of this pressure campaign, legal harassment of independent media in Poland also reached unprecedented levels in 2020 as PiS officials and their allies continued efforts to bury critical outlets under an avalanche of costly and time-consuming court battles. The frivolous nature of these cases means many can be classified as Strategic Lawsuits Against Public Participation (SLAPP).

While physical attacks on journalists are rare in Poland, in October and November there was a clear increase in violence against journalists covering protests. Several were injured and some hospitalised after violence from both protesters and police officers. On some occasions, police hit or shot rubber bullets at journalists clearly identifiable by ‘PRESS’ insignia.

This subtle but escalating assault on the freedom of the media is driven in part by PiS’s populist ideology, which has instilled in its leaders the view that they alone represent the “will of the people”. Control of a legislative majority is wrongly taken as a carte-blanche to undermine democratic norms and solidify its control over all areas of governance. This is exacerbated by the fortress mentality of PiS leaders, who see critical journalism and investigative reporting as “oppositional”, rather than part of a democratic system’s necessary checks and balances.

Five years of these continued policies mean Poland is now taking worrying steps down the path established by Hungary, whose government has in the last decade created and then exported a system of media capture unprecedented in the European Union. In a calculated cherry-picking exercise, PiS has selected parts of its model that are effective and found workarounds for those that do not fit the Polish system. The effect, as one interviewee noted, is that “free journalism is slowly dying in Poland.”

This report is part of the Media Freedom Rapid Response (MFRR), a Europe-wide mechanism which tracks, monitors and responds to violations of press and media freedom in EU Member States and Candidate Countries. This project provides legal and practical support, public advocacy and information to protect journalists and media workers. The MFRR is organised by a consortium led by the European Centre for Press and Media Freedom (ECPMF) with ARTICLE 19, the European Federation of Journalists (EFJ), Free Press Unlimited (FPU), the Institute for Applied Informatics at the University of Leipzig (InfAI), International Press Institute (IPI) and CCI/Osservatorio Balcani e Caucaso Transeuropa (OBCT). The project is co-funded by the European Commission. www.mfrr.eu/